The Ninja Looking For A KO 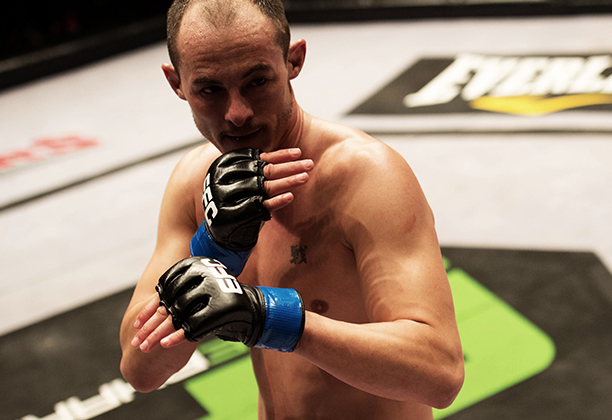 Johannesburg (South Africa) – Frederich ‘The Ninja’ Naumann, EFC AFRICA’s fastest rising star, faces his most brutal test when he clashes with former welterweight champion Dallas Jakobi at EFC AFRICA 22. In his quest for the lightweight title, Naumann sees this as a crucial fight, one he needs to finish inside two rounds.

“Jakobi is going to be my final test. If I beat him the way I want to beat him, and that means finishing him, then it will be confirmation for me that I am ready for a title shot,” said Naumann, who believes he could challenge for the title later this year or early next.

“He’s an ex-champ,” said Naumann, “he’s a physical guy. He’s cutting a lot of weight too. I know I’m going to need to counter his ground and pound. I think he’s going to try and take me down and GnP me because I have more speed than him, and a reach advantage.”

Jakobi is well known for his brutal ground and pound abilities as well as his strength. It’s his norm to close the distance and wear his opponent down.

“I expect him to be as fit as they can get,” confirmed Naumann. “He has a lot of experience. He’s been a champ, he’s fought the top on the continent. He’s a very smart fighter. He doesn’t rush in, he’s always thinking, he fights on his feet. I’m not underestimating him. I know it’s going to be a tough one.”

For this fight Naumann reveals that he has been concentrating only on wrestling and boxing, both to counter any takedowns by the former champ and to give him the sting he needs to KO his opponent.

“I would like to drop Jakobi with a TKO or a KO. I don’t want to go to ground with him. I want to keep it standing, keep the distance, tight, one, two, three, four combinations, get out. If I can finish Jakobi within a round or two I will know, for sure, that I will be ready for Don Madge or Leon [Mynhardt].”

“What scares me about Jakobi is I think he made peace with his fight against Jadyson,” said Naumann, referring to the bout in which Jakobi lost his title and went three brutal rounds with a broken cheekbone. “He stood with Dino Bagattin for all three rounds. It shows he can overcome the past, past disappointments, that he is mentally very tough.” “But the thing is,” he added, “I’m hungrier than him. He’s had a title before, I want it.”

When asked if the Ninja had any words for Jakobi, he responded:

“I know you’ve had more Hexagon experience than me, but don’t underestimate me. I’ve been fighting my whole life. I’m going to bring it. You’re in for a hell of a fight.”