‘One Gear’ Will Stop At Nothing 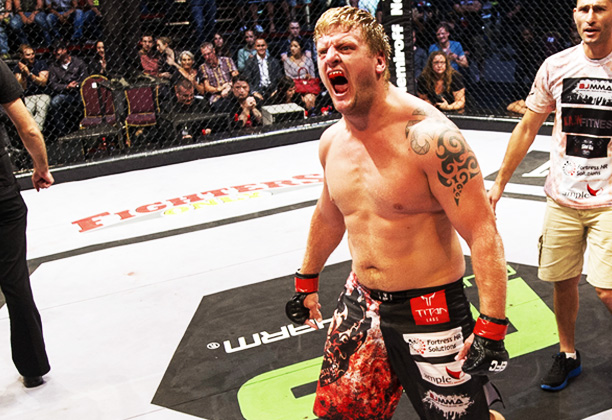 Johannesburg (South Africa) – EFC AFRICA heavyweight champion, Andrew ‘One Gear’ van Zyl, is the organisation’s toughest. He has a record of 9-1 and over ten years’ experience. He has faced the absolute cream of the heavyweight division and beaten them all. He has done everything required of him to hold Africa’s most cherished belt, except defend it. At EFC AFRICA 23 he gets that chance when he faces Sors ‘Guru’ Grobbelaar, a kickboxing specialist on a ruthless winning tear.

“He’s a tough man,” Van Zyl has said of his coming opponent. “He’s most dangerous when he’s kickboxing. But he’s going to be facing an EFC champion that’s fit and ready for a five round fight, and then some.”

With his entry into MMA at the very beginning of the sport on the continent, Van Zyl has been through everything top bouts have to offer, building a massive arsenal of knowledge and grit in doing so.

“Right at the beginning,” said the champion, casting back to his entry to the sport, “if you wanted to compete you had to come down and show your ability in a scout hall in Blairgowrie. It was Pride rules, so a lot more dangerous than what MMA is today.”

“I fought Kobus Huisamen, who’d had over 100 professional kickboxing bouts, although I didn’t know it at the time.” he relates. “In round one I got my head smashed in. I remember Bobby Karagiannidis [Van Zyl’s current coach] was in my corner and at the end of the round he slapped me around and said, ‘are you actually gonna throw a punch? Get back in there and do what you do!’ I went back in, clinched up, took it to the ground, got mount and won by armbar.”

In 2004 Van Zyl received his teaching diploma and returned to his Alma Mater, Parktown Boys High, to guide the next generation. With the taking on of a fulltime job he put a hold on MMA competition. It was in 2009, however, with the staging of the first EFC AFRICA event that he rediscovered his passion.

“EFC 01,” said Van Zyl, “was the reason I got back into MMA. I’d stopped fighting by then. I didn’t see the point. I was concentrating on teaching when I heard about this new MMA show and went to check it out. It blew my mind.”

“My first loss at the hands of Ruan was something that took me a long while to confront and come to terms with. I knew I had to take my body to the next level. I worked hard and proved myself in my fights against Karim and Visser,” he said. “I entered Iron Man 70.3 in 2013 and completed the race in January. This took my cardio vascular capacity and mental game to a new level.”

At EFC AFRICA 18 Van Zyl got his chance at redemption, and in the most epic heavyweight encounter seen on the continent to date, himself and Potts battled the full five rounds – Van Zyl ultimately winning by decision.

“I’m going out there to improve my experience,” said Van Zyl on his coming title defence. “Sors is a good stand up fighter. I would like to show that I can dominate at all facets of the game. I will test him on every level. I hope he’s ready for that.”

Grobbelaar is on a three fight win streak, having bulldozed his way through Misholas, Strauss and most recently Mikixi, an athlete who he famously dropped with a right hand, something no one else has achieved, Van Zyl included.

At EFC AFRICA 23 an up and coming kickboxing king comes face to face with Africa’s toughest veteran and undisputed heavyweight champion. It is a bout where both men will be tested beyond capacity.

“In order to beat me,” said Van Zyl, “I will have to be carried out of the Hexagon. This is my belt. I hope he comes prepared.”