Johannesburg (South Africa) – Yesterday at 18h00 the news was finally received that Henry ‘Hurculeez’ Fadipe, scheduled to face Martin ‘The Punisher’ van Staden at Thursday’s EFC AFRICA 22, would not be able to receive his VISA to travel from Ireland to Johannesburg in time. The news has forced the postponement of the battle, the two now set to face each other at EFC AFRICA 23, September 12.

“We tried everything,” says Cairo Howarth, EFC AFRICA president. “Henry applied for the VISA in good time but a series of small administrative problems, experienced at both the Irish and South African consulates, forced small delays that kept narrowing the window. We’ve re-booked Henry’s plane ticket twice, constantly assured, or at least hoping that the VISA would be issued the next day, but finally, last night at 18h00 we received the final word that he wouldn’t be able to travel in time.”

“When we realised that there may be a problem earlier this week,” he continues, “we looked at shuffling the card from all angles, but suitable replacement athletes and matchups couldn’t be made or found. At one stage we were even looking at doing a live Skype hook-up where Henry would weigh-in from Ireland, then immediately get on the plane. Ultimately, after looking at all the options, we feel the best is to delay the fight. It’s a great matchup, one that both the fighters and fans want, so we’d rather see it in four weeks.”

The postponement means that the EFC AFRICA 22 fight card will shuffle upwards, with the massively anticipated Fraser ‘The Omen’ Opie vs. Egyptian powerhouse Mohamed ‘Felx’ Ali moving up to the live, global broadcast.

“This is great news for that bout,” says Howarth. “Ali is a massively popular fighter in the Arab world. His fans will now be able to watch him live on Abu-Dhabi TV.”

Meanwhile, the heat between Van Staden and Fadipe has intensified even further. Twitter erupted yesterday with Van Staden accusing Fadipe of negligence, and Fadipe confirming that it will be hard to wait four weeks for the chance to take it to the Punisher. 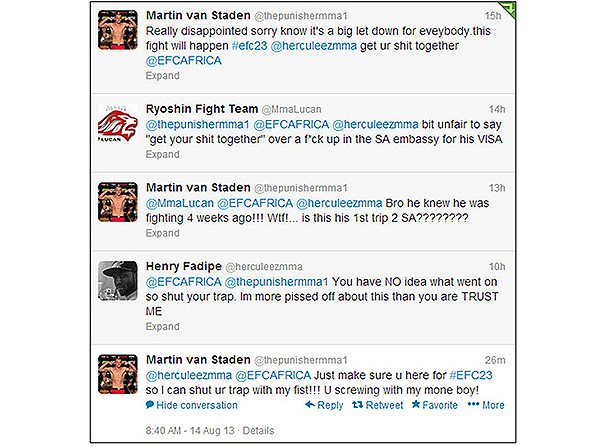 Follow Van Staden at @thepunishermma1 and Fadipe at @herculeezmma to catch all the action between these two.