The Fight Of The Decade

Madge vs. Mynhardt at EFC AFRICA 25 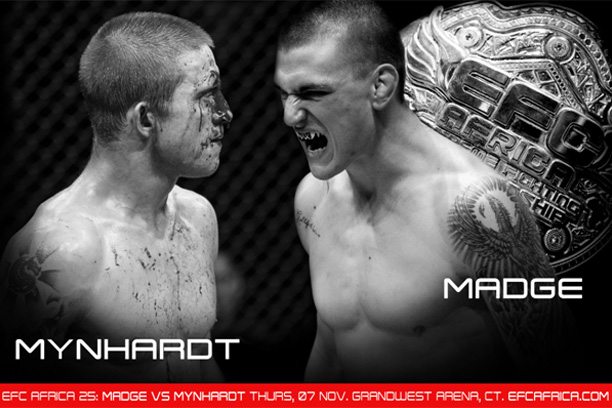 Johannesburg (South Africa) – Don Madge and Leon Mynhardt first fought in April of 2012. There they delivered perhaps the greatest war yet seen in the Hexagon. Madge, a global Muay Thai superstar and Mynhardt, a striker at the top of Africa’s summit, redefined what was thought possible in standup encounters. In November of this year these two warriors meet in a rematch where the stakes could not be higher. This time Madge is the EFC AFRICA lightweight champion, and Mynhardt will put everything on the line to take his belt.

The careers of Madge and Mynhardt have been closely intertwined. In their first encounter Madge revealed himself as a striker amongst the top five in the world, but did not win. Mynhardt, while not possessing the finesse of Madge showed sheer, brutal toughness in continuing despite two deep cuts across his face, absorbing everything Madge had to offer and finally smashing his opponent with a left hand that created one of the most controversial outcomes yet seen: Madge appeared to call a timeout on the grounds of a mouth guard bitten in half, a move that gave him a TKO loss.

Later that year Mynhardt challenged then champion Costa Ioannou for the lightweight title, the top contender position given him by his victory over Madge.

Ioannou was recognised as near unbeatable on the ground and the bout was universally seen as being won or lost there. As expected Ioannou immediately took Mynhardt down and smothered him, winning by rear naked choke at the end of the first.

Meanwhile Madge had taken an impressive ground based win, the first time he’d shown his own grappling ability, and on the back of that was offered the title shot.

Again the situation seemed clear. Mynhardt had beaten Madge with superior mental conditioning where both were standing, and Ioannou had destroyed Mynhardt on the ground. Ioannou seemed absolutely unbeatable, on paper Madge was in deep trouble.

On 27 June of this year Madge gave Ioannou the war of his life, ending his reign with a rear naked choke in the fifth. Suddenly everything was reversed. Madge had done the impossible, he had shown the maturity and mental toughness he had been lacking in his first bout with Mynhardt, he had conquered all.

At EFC AFRICA 25, when Madge and Mynhardt meet for the second time, the thread between them climaxes. Madge is intent on avenging his only loss in the Hexagon against only the second man to have beaten him in a career spanning over a hundred fights, the other a world champion. Mynhardt is looking for redemption and proof of what he has worked his whole career to be; the best. For both each is the greatest test possible, for both losing is not an option, winning is everything.

This fight is impossible to predict, it is a replaying of 2012’s fight of the year and in the journey that each has taken to it could very possibly explode into the fight of the decade. At EFC AFRICA 13 these men presented an unforgettable war. On November 07 they have two extra rounds to do the same.

In addition to the main event 24 more of Africa’s greatest warriors go head to head in 13 bouts in total.