Opperman on what went down at EFC AFRICA 23 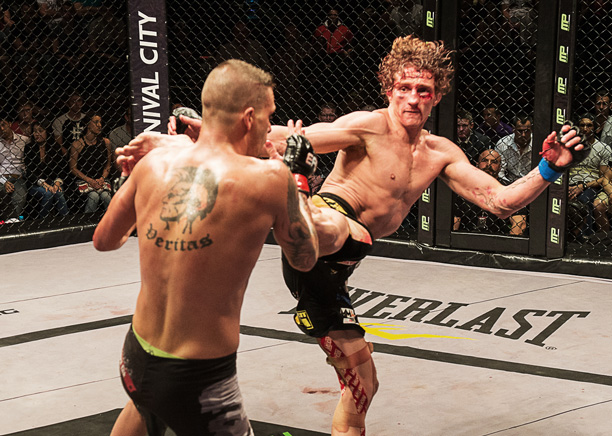 Johannesburg (South Africa) – On September 12 Michiel Opperman lost his welterweight title to Dino Bagattin in a bout that will be spoken of for years to come. While Bagattin displayed the form of his life, out striking and out grappling the champion, Opperman showed grit in equal measure, staying inside a fight that had run away from him. In this interview Opperman takes fans inside those 25 minutes.

Congratulations on your showing on Thursday. You took a lot of punishment but never gave in. How are you feeling after the fight?

My heart is pretty sore, losing the belt! But Dino deserves the W.

Dino put in a massive performance and you didn’t seem to be on form on the night. We’ve heard that there was a problem with your conditioning training. Can you comment?

No we trained very hard. Things did not go my way on the night. I had some injuries going into the fight. That did make it difficult to move and do my thing.

A lot. Dino out fought me!

Where do you think?

Surprisingly I felt most uncomfortable on the ground and that’s where he did most of the damage.

Do you feel you were able to implement your game plan?

No way. Due to severe pain that I was in from the first round it was very difficult to do anything!

Looking back, do you feel you underestimated Dino?

I don’t think so. I knew he is very tough and it’s going to be a tough fight. This is how fighting works, sometimes everything goes your way and other times nothing works out.

You had a good first round, scoring a cut on Dino’s face. After that the fight began to slip away. What were you thinking as Dino started to pull ahead?

Just to keep working! Make it as difficult for him as possible.

What can you take from this experience?

There were many lessons learned on the night. I just need to implement them and remember them so that it does not happen again.

You took a lot of elbows, perhaps the most in a Hexagon bout so far. How’s your head?

I have about 22 stitches! That’s the thing with elbows; they tend to cut more than rock you. But blood is only red sweat [laughs].

So when do you think you’ll be back in the gym?

The stitches come out on Saturday, I’ll be back at the gym on Monday!

It seems the curse of the WW belt continues. Any plans to be the first to hold it twice?

Definitely. I will be back on top again!

Things between you and Dino are now 1-1. Are you looking for a rematch with him specifically?

I think it would be a great fight. But let’s see what EFC decides. I just want to get back in the Hex ASAP. I even asked Morne if he can’t make a plan for October!

I’d like to thank all my sponsors, my wife, family and friends for their support! I will be back ASAP!

Any words for Dino?

Congrats my man! You deserve it! Enjoy the bling!

And for the fans?

Thanks for their support and well wishes! Sorry that things didn’t go as we planned but that’s fighting and Dino is a strong fighter!