Make Or Break At Featherweight 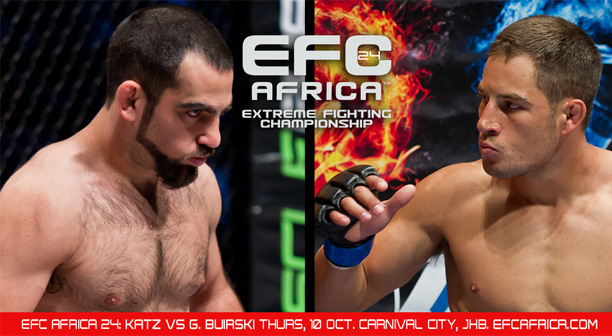 Johannesburg (South Africa) – Brendon Katz controversially parted with the EFC AFRICA organisation in September 2010. This October, at EFC AFRICA 24, he returns. There he battles Gareth Buirski on the main card, a fight and an opponent that will make or break Katz’s re-emergence on African soil.

“I’m excited, man. I’m so fired up,” said Katz in a recent interview. “I left two and a half years ago. I got taken for a ride by a dirty manager, so I regretted that pretty quickly but in the end it was a good experience, opening my eyes to the level of competition and productions around the world. Now, I’m back with the best I’ve seen so far, EFC AFRICA.”

Fresh from a searing, 34 second TKO GnP victory over Francois Groenewald, Buirski is currently on the form that has made him famous. At EFC AFRICA 16 he obliterated Markus Taljaard with a massive overhand right KO, and at his debut he finished Koba Iakobidze with a third round guillotine.

Katz himself is still riding the legend that is his bout with Costa Ioannou at EFC AFRICA 03, as well as his unforgettable third round KO of Mark Jones at EFC AFRICA 04. Since then he has put in brutal performances in the UK.

Both men have a similar, power based style. Both are happy to trade and both thrive on grueling encounters.

On October 10 the featherweight division gets a massive injection with the return of Katz. On that night, whichever way the bout goes, the hierarchy will shift; the division’s next title contender will be making himself known.