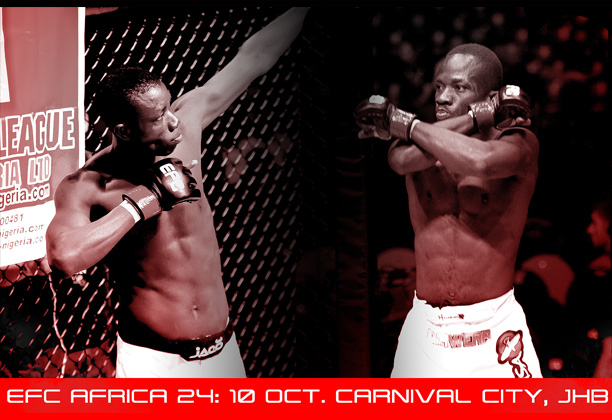 Johannesburg (South Africa) – EFC AFRICA 24 is the most truly African event staged to date. Apart from the historical featherweight title fight, where for the first time two non-South Africans in Demarte Pena (Angola) and Alain Ilunga(DRC) are contesting the championship, two Nigerian athletes, Steven Momah and Victor Anyaogu, will also be in action.

Having arrived in the country one week ago, three weeks before their coming bouts, Momah and Anyaogu took time to talk about the unique challenges they face as athletes training and competing out of Nigeria, and the ways they are overcoming them.

“Adjusting to the climate here in Johannesburg is a factor,” said Momah. “The air here is very dry, compared to the humidity of Lagos, and of course it is much higher up. The altitude is a factor.”

In his last bout, a matchup with Johan van Staden at EFC AFRICA 21, Momah said he was performing according to his expectations, but in the second round began to feel the effects of the climate difference, losing stamina as a result.

“Thousands of my brothers at home watched my bout,” he said. “Everyone could see that I was not myself.”

For his coming match at EFC AFRICA 24, where he faces highly rated debutant Pietie Coxen, Momah has arrived in Johannesburg early to ensure that he is fully acclimatised.

There are also other challenges that he and Anyaogu have had to face.

The first is the practical problem of ensuring the correct travel documents are arranged in time, a process Momah describes as “requiring wisdom”. The second, and most telling, is the lack of ground fighting expertise, a phenomenon experienced by other Central and Northern African athletes also.

Boxing and Kickboxing are widely supported sports in Nigeria. Wrestling and Judo are also recognised and practiced, but not to a high degree, while the essential MMA art of Jiu-Jitsu has very little following.

“Our coaches at home are stand up experts,” said Momah. “We have few people who have deep knowledge of Jiu-Jitsu.”

Momah and Anyaogu have however been working with Nigerian born but South African based coach Neat Agbakwuru recently. Under his tutelage both speak of a vastly improved ground game that is only getting better.

“Nigerian athletes are progressing all the time,” said the coach. “We have exceptional talent back home. We have incredible will. In my opinion, what we still lack is more modern training facilities.”

Raymond Ahana, another Nigerian athlete with a huge EFC AFRICA following, has recently spent three months living and training in Johannesburg with the express purpose of acquiring skills and taking them home with him. He sees this process as crucial to the development of the sport in Nigeria, and plans to do as much of it as possible in the future.

For Momah and Anyaogu the journey continues. At EFC AFRICA 24 they have another opportunity to show the world the talent that exists in Nigeria, and to inspire their brothers back home.