Nyide & Botha Shooting For Everything

Who wants it more at EFC AFRICA 23? 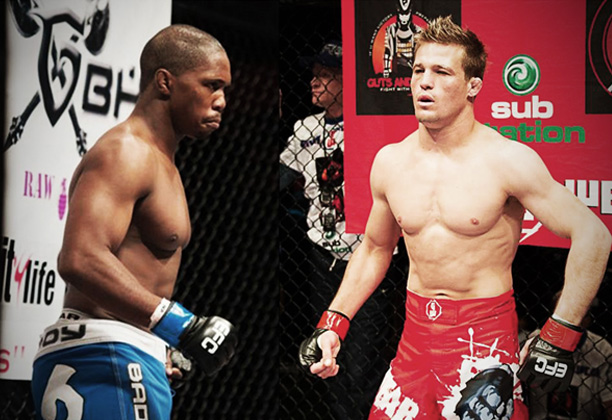 Johannesburg (South Africa) – Peter ‘Kratos’ Nyide is an electrifying athlete with unparalleled courage. Hanru Botha is a South African and African wrestling champion trailing a massive pre-Hexagon reputation. These two meet at EFC AFRICA 23 with everything on the line.

First entering the Hexagon on only four days’ notice and at lightweight (a class above his own), Nyide fought out of his skin but went down to a submission from current top lightweight contender Frederich Naumann.

At EFC AFRICA 19 Nyide faced Markus Taljaard where both put on a fight of the night display. Nyide broke both his hands in the bout but despite the injury fought through to a very, very close decision. The most phenomenal round of that fight was the third, masses of punches traded and landed by both, Nyide with two broken hands.

Botha made his debut at EFC AFRICA 21. Trailing an immense amateur reputation and with his unparalleled wrestling pedigree many saw him as the man to finally derail Boyd Allen. That prediction proved incorrect as Allen’s experience, skill, and the size of the occasion got to Botha, who, after landing two incredible takedowns, went down to a submission towards the end of the first round.

Both Nyide and Botha are massive talents. Both are riding the rollercoaster that is MMA, the fractions that exist between winning and losing that give this sport its edge. Both are hungry. Both are after performances that truly showcase who they are and what they are capable of. At EFC AFRICA 23 both are primed for the fight of their lives so far.

This bout can be seen live at Carnival City, Johannesburg, or larger than life, in full HD, at selected Nu Metro cinemas throughout South Africa. Alternatively, stream Nyide vs. Botha live at efcafrica.tv from anywhere in the world.