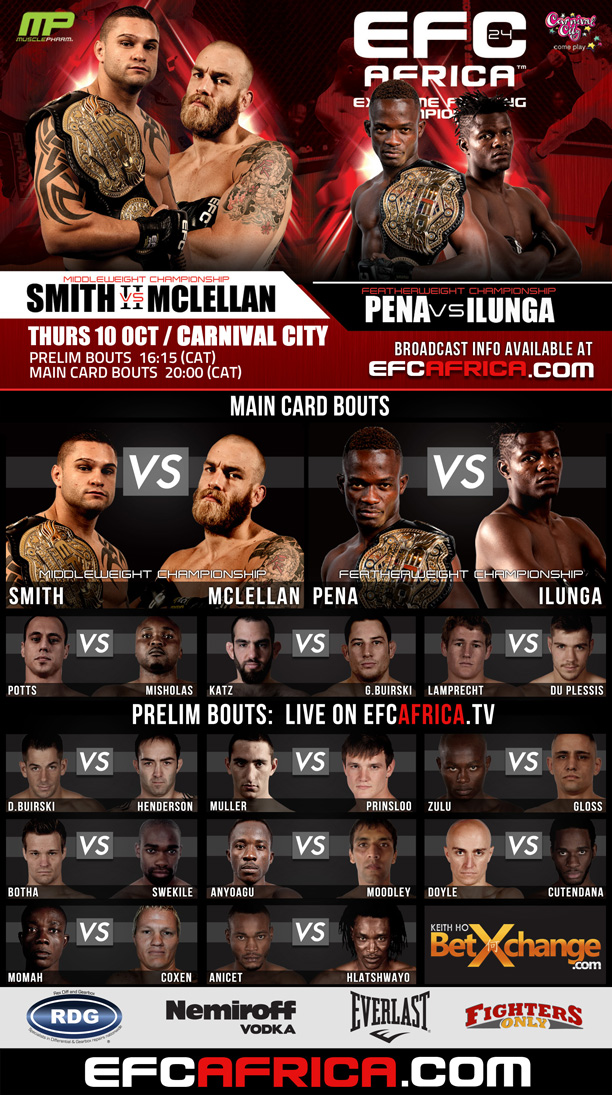 Johannesburg (South Africa) – One of the biggest fight cards in history has been finalised, and promises massive action on October 10.

The evening is headlined by the epic rematch of Jeremy ‘Pitbull’ Smith vs. Garreth ‘Soldierboy’ McLellan for the middleweight championship, and co-headlined by undefeated champion Demarte ‘The Wolf’ Pena’s record breaking fifth title defense. He is up against the most feared striker in the division, Alain ‘Commander’ Ilunga, for the featherweight championship.

Ruan Potts vs. Ricky Misholas is a bout brimming with bad intent. Scheduled to face each other at EFC AFRICA 20 Misholas pulled out at the 11th hour, a move Potts has yet to forgive.

“The winner of this fight will face Van Zyl for the title,” said EFC AFRICA president Cairo Howarth.

Brendon Katz returns to the Hexagon, an athlete not seen in action on the continent since 2010, and still remembered as one of the most lethal and exciting competitors the organisation has seen. His matchup against Gareth Buirski is an epic prospect.

JC Lamprecht, the man from Potchefstroom responsible for the demolition of Culverwell and the fight of the night award versus Sinclair, takes on WAKO K1 world champ Dricus du Plessis. Du Plessis is yet to be defeated in over 30 encounters. He has 27 KO’s to his name, is only 19 years old, and has already put in two blistering performances in the Hexagon.

On the night’s prelim card, currently only available for viewing at the venue and on efcafrica.tv, huge stars will perform.

David Buirski goes head to head with acclaimed, gritty veteran Wade Henderson in a massive test for both at welterweight.

Josh ‘The Jedi’ Muller, fresh from a flawless comeback performance against Jiu Jitsu maestro James Saks faces Morne Prinsloo. After only one performance, Prinsloo is already being touted as the next big name in the welterweight division.

‘King’ Leo Gloss, two time title contender faces Nkazimulu Zulu, a devastating up and comer. Zulu has been described as potentially the best pound for pound athlete on the continent and already has a knockout of the night award behind him. This is a pivotal bout for the bantamweight division will do much to identify one of the inaugural title challengers.

The Nigerians are in force with Steven Momah and Victor Anyoagu, both in action against newcomers Pietie Coxen and Darell Moodley, Momah and Anyoagu determined to hold their nation’s name high.

Kicking the evening off, Anicet Kanyeba takes the fight to Amos Hlatswayo in a featherweight, make or break bout for both.

EFC AFRICA 24 presents 26 of Africa’s greatest warriors in 13 bouts. Get your tickets now.