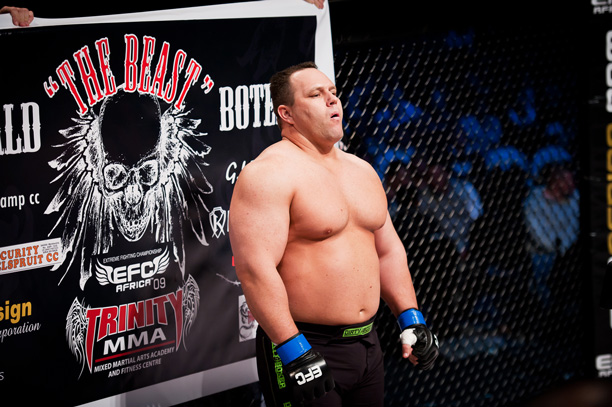 Botes ahead of his EFC AFRICA 09 bout

Johannesburg (South Africa) – Dewald ‘The Beast’ Botes, the hugely powerful super heavyweight that battled Wilhelm ‘Tiny’ Strauss back at EFC AFRICA 09, is set to return to the Hexagon.

“He is the biggest, most powerful athlete we have had in the Hexagon to date,” said EFC AFRICA president Cairo Howarth. “At the moment the only man that has to cut to make weight in the heavyweight division is Tiny [Wilhelm Strauss]. In the size and power of Dewald the rest of the heavyweights are going to be facing a completely different kind of animal to what they’re used to.”

Botes has competed in the Hexagon only once. After his bout with Strauss, and on hearing that the super heavyweight division was not to be continued, he decided to bow out instead of cut down.

“I’ll be dropping 25kg,” said Botes, aiming to make the 120kg heavyweight cutoff limit. “I’ve been thinking of returning for a while now. Graeme’s [Cartmell] been calling me and encouraging me. I’ve decided to do it. I’m going all out.”

Botes expects to drop the first 15kg’s easily; it’s the last 10 that he knows will be the real challenge.

“I’ll be dropping the weight really slowly,” said Botes. “I plan to lose none of my power or speed. I’ve given myself more than enough time to do it.”

“It’s balls to the wall,” he added. “I’m not doing this for any other reason than a shot at the belt.”

Botes is expected to appear in either the EFC AFRICA 27 or 28 event, to be staged early next year.