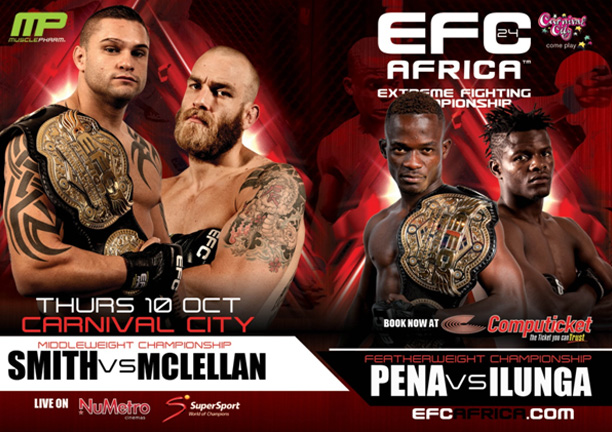 Smith and McLellan’s war is over a year in the making. They have fought before. At EFC AFRICA 12 they clashed in a tense, technically brilliant and violent battle where Smith took the belt from McLellan. Many still contend that ‘Soldierboy’ was leading at the time of the submission. Soon they face each other again, now in a bad blood encounter boiling through both their veins.

Alain ‘Commander Boy’ Ilunga has been tearing the featherweight division apart. After a devastating victory over Wesley Hawkey in April of this year he has finally been awarded the ultimate opportunity; a shot at the featherweight belt.

“It doesn’t matter to me anymore,” said the champion, Demarte Pena, of his opponent. “Whatever he plans against me is not going to work. I’m not a fighter that he can kick once and I’ll crumble. He’s a good fighter but I’ll be ready for anything. I’m prepared to go through hell to keep my belt. If he wants it, if he really wants it… he’ll have to do more than that.”

In addition Brendan Katz, the megastar that controversially parted with the EFC AFRICA organisation in 2010, makes his hugely anticipated return to the Hexagon. He goes head to head with the scorching Gareth Buirski at featherweight. Buirski is fresh from a first round KO of Francois Groenewald, Katz is driven to shatter expectations in his comeback appearance. Neither will be holding back.

Plus 20 more of Africa’s greatest warriors go head to head in 13 unbelievable bouts in total.