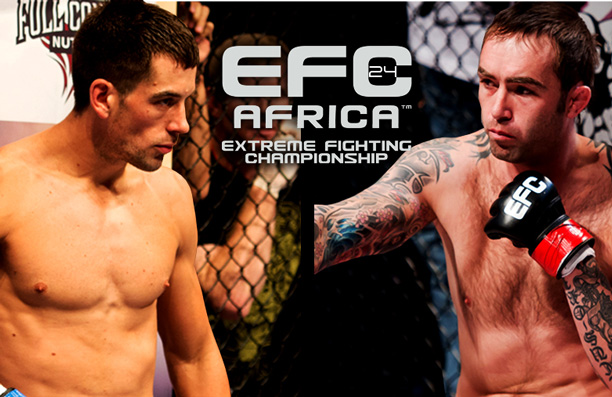 Botes ahead of his EFC AFRICA 09 bout

Johannesburg (South Africa) – David Buirski and Wade ‘The Goat’ Henderson have been on a collision course ever since Buirksi first entered the Hexagon at EFC AFRICA 14. Both are never say die contenders operating on the cusp of a title shot, both are looking to break through.

Henderson first appeared at EFC AFRICA 01 and since has featured in a phenomenal 12 of the 23 events staged so far. He is an athlete with a worldwide reputation, a dangerous prospect to any in the middleweight division.

Boasting career scalps such as McLellan, Vapi and Maphutha, and having taken the likes of JP Kruger though to a decision, he is a campaigner that is as tough and as experienced as they come.

D. Buirski is a man who, like his brother Gareth, is hitting the form that characterizes all three Buirski brothers (bantamweight Matthew Buirski being the third).

At EFC AFRICA 21 he faced highly rated kickboxer Nicholas Radley, withstood enormous shots from the Capetonian, then took him to the floor and dominated with superior power, taking a RNC victory in the first round.

On October 10 he will be entering the Hexagon with that same Buirksi power and supreme fitness. However, in the skill set of Henderson, a man renowned for wiley ground work, and with his huge experience, D. Buirski will be challenged in every area.

This is a bout likely to go anywhere. A chess match where both will need to be supreme in every aspect of their craft, one where a single error spells win or loss.

These men are evenly matched; a bout between them is a necessity. To pick a favorite here is a difficult task. Expect grueling, MMA trench warfare when these two face off.