Battle Of The Behemoths 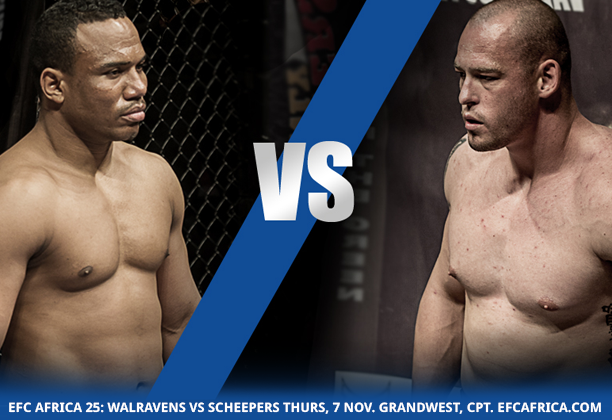 Both men will be angling for impressive, reputation sealing victories.

Walravens first entered the Hexagon at EFC AFRICA 18 against Wilhelm Strauss, already a multiple Judo champion with a growing MMA reputation. The occasion that is Africa’s biggest MMA stage was a large a step up, however, and he fell early to a brace of knees to the head.

At his second and most recent appearance (EFC AFRICA 22) he was a different athlete. With ice cold focus he out boxed and ultimately KO’d an energized Ian Visser, putting on a stand up show as precise and powerful as his Judo champions’ skills.

Scheepers made his debut in August 2013 with a ground and pound demolition of Egyptian Koko Hammer.

Appearing again at EFC AFRICA 23 he fell to the superior experience of Brendon Groenewald. Having started well with a powerhouse right hand to Groenewald’s face, he was undone by the Jiu Jitsu athlete’s knowledge on the ground.

With one win and one loss behind each, EFC AFRICA 25 is the proving ground for both men. Having found their feet in the Hexagon, it’s now time to make their mark.

Expect the ring to rumble when these two meet.