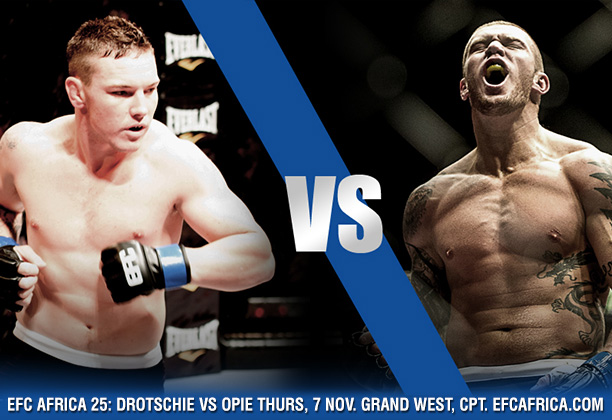 Johannesburg (South Africa) – Gideon ‘Juggernaut’ Drotschie defends his EFC AFRICA light heavyweight title for the first time in Cape Town, his home town, on November 7. His opponent is Fraser ‘Omen’ Opie, a highly decorated UK based athlete with an arsenal and track record primed to challenge the champion to the limit.

Drotschie took the title by defeating Danie van Heerden in June 2013. He and Van Heerden went four rounds, Drotschie dominating with principally a ground assault, ultimately taking victory with a keylock submission. His title fight was his third EFC AFRICA appearance, certainly his biggest test, and an indicator of the enigma that he is.

Drotschie is undefeated and yet to be stretched. The student of legendary heavyweight Rico Hattingh he shows the skillset of his BJJ black belt teacher, and the real toughness of a born fighter. He has steamrolled every opponent, all the way to the top.

“It’s extremely rare for an athlete to get a title shot after only one appearance,” said EFC AFRICA president Cairo Howarth. “But Fraser Opie is that kind of athlete. He has an excellent record behind him and put on a huge performance at his EFC AFRICA debut. There’s no doubt that he is the worthy light heavyweight challenger right now, the athlete that will be Drotschie’s greatest test.”

Fraser Opie was born and raised in Johannesburg but relocated to the UK in his early twenties. Initially a bodybuilder he took up kickboxing for fitness and discovered his true talent. MMA followed soon after.

He is currently the veteran of 16 pro MMA fights, 11 of those wins. He is the reigning Fight UK and Cage Contender light heavyweight champion, was a TUFF 17 finalist, only losing a spot in the house on points after a big cut to middleweight, and in his first EFC AFRICA appearance, in August this year, he dominated Egyptian Mohammed Aly, taking victory in the first round by GnP.

Of Opie’s 27 pro fights (MMA and kickboxing), only three have gone the distance.

With Opie’s experience, finish rate, brutal power and current UK champion status he is the ultimate test for Drotschie. A clash between these two will be a massive test for the champion’s as yet uncharted skill set, and one devastating fight.

This bout is an intercontinental event, a clash of the best of Africa and the best of the UK. Either way, the light heavyweight bar will be set several notches higher on the morning of November 8th.