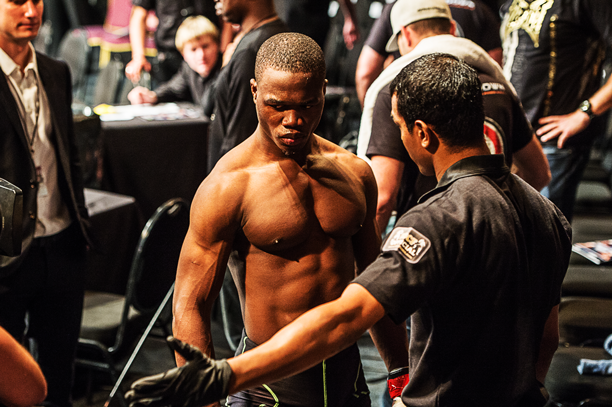 Mukulu is a highly regarded MMA athlete who has been training at Wynberg’s Takedown MMA for the last three years under head coach Gary Barrett.

Mukulu began his martial arts involvement as a 12 year old boy in the DRC, taking part in Judo and Japanese Jiu Jitsu training.

After relocating to Cape Town with his wife and two daughters he found Takedown and made the transition to full Mixed Martial Arts.

“Bruno is hard as nails,” coach Barrett has said of his charge. “He hits like a truck and is very determined to be a champion.”

After a loss at his debut against undefeated K1 World Champ Dricus du Plessis, Mukulu is massively motivated to take the fight to Lubbe.
His task will not be easy. Lubbe has some big scalps behind him.

“I’m fired up. I made a mistake in my first fight at EFC,” said Mukulu. “I have learned from that and can’t wait to have the fight I’m capable of. I respect Juan. He is a good fighter. I’m looking forward to a hard fight.”

EFC AFRICA 25, presented by MusclePharm, takes place on Thursday 07 November at the GrandWest Grand Arena, Cape Town. Tickets on sale now at www.computicket.com. Stream the entire event, live an in HD, from efcworldwide.com/efc_africa_404.php.