‘I’ll Fight Anyone, Even A Bear’ 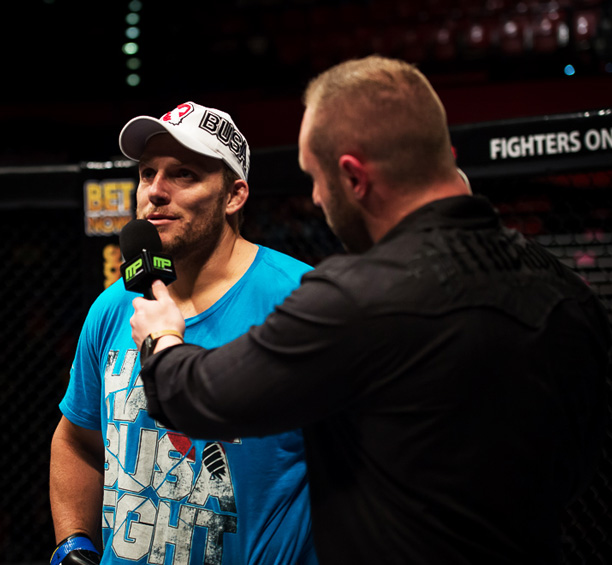 Johannesburg, South Africa – Known for smashing Sors Grobbelaar by submission inside the first round and some of the weirdest tweets on the net, Brendon Groenewald is an under the radar athlete with a mean skill set. At EFC AFRICA 25 he faces the Angolan wrecking machine Bernardo Mikixi in the biggest fight of his career. In this quick fire Q & A he lets fans in on a different sort of mind.

After hammering Sors Grobbelaar in your debut you decided to drop to light heavy. Why?

I was told my frame doesn’t cater for heavyweight – then I proved them wrong. But my face hurt after.

Would you say it was the weight cut that affected your performance against Drotschie?

No he was the better man on the day. It’s that simple.

He’s your only defeat. Do you think fans underestimate you because of that performance?

No ways! I think everyone knows I come to fight and how far I’m willing to go to just be competitive, never mind win. I once finished a pocket of potatoes. That also nearly killed me.

You made short work of Roelof Scheepers. Were you expecting more from him?

No. He is a very good fighter. I had a game plan, he let me implement it and kazaaaaaaam! I won! He is strong.

You took quite a crack to the jaw from him but shook it off easily. It seems you’re used to taking those kinds of shots?

Hahahahahahaha. I’d love to claim a granite jaw and super powers, but can’t. I think I’ve been lucky with a few.

Why did you move to Cape Town from East London?

Is taking on Mikixi a step up in the ranks for you?

For sure. He is a very dangerous opponent, so I think so.

Mikixi is a massive athlete with known punching power. Are you getting the right kind of sparring to prepare for that?

L.O.L. Doing sparring for Mikixi would be silly. I fight off my back so I’m training not to get hit – hopefully it works.

I think he should have used Judo. Sors is an elite striker that takes respect if you try to trade with him, and damn the Guru can eat! No, I know he is training harder than ever for this fight and needs this win, so I expect a more rounded and clinical fighter.

Do you think Mikixi buckles under high pressure situations?

No, he’s got lots of experience so he shouldn’t.

What’s the best way to fight him?

No special way. I just fight.

How much do you love your Mom?

Creepers! Allot. I never actually tell her, but I love her plenty.

How serious are you about going all the way in this division?

Well a belt would be real cool. I’d even wear it at weddings. No, I do seem to take the whole thing lightly, but it’s my catalyst.

If you beat Mikixi, how close do you think you’d be to a title shot?

Well that’s not up to me, but it will come hopefully before I retire at 60.

Is there anyone in the division you specifically want to face?

No, I’ll fight anyone, even a bear.

Why do you fight?

Ice cream is nutritious for me.

Yes, why won’t my earth worms dance? Mmm… Chocolate mousse could be nice.