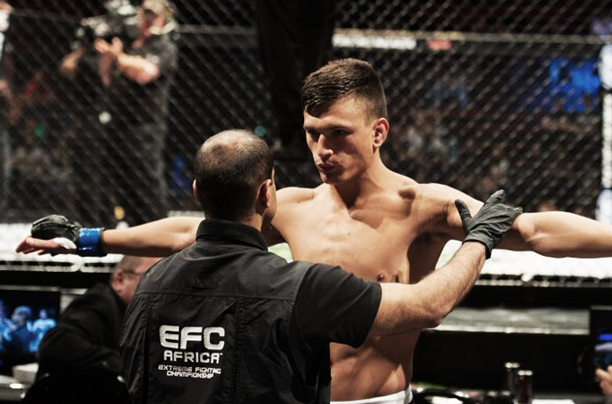 Johannesburg, South Africa – Don Madge defends his lightweight title for the first time at EFC AFRICA 25. His opponent is Leon Mynhardt, the only man to have defeated him in the MMA arena, and only one of two men on the planet, in over 100 fights, to have beaten him at all.

This week Madge has turned down numerous media requests for an interview, giving no comment at all.

Earlier this week he was described in a prettytuff article as “not a fan of smack talk or even fight hyping”.

Madge’s coach, Mike Mouneimne, stated that Madge has “a busy training schedule, which doesn’t leave a lot of time,” but wouldn’t go so far as to say that he would not speak to the media.

Is the choice to avoid the media one to focus on training absolutely? Is it a decision to make sure that his focus isn’t disturbed?

In the build up to Madge’s title bout, where he dethroned Costa Ioannou, he was very vocal in the media. Has he learned a lesson, or does he see Mynhardt as an even bigger threat?

His opinion that fights should not or don’t need to be hyped points to the idea that fights themselves should sell fights. Madge is certainly that sort of athlete, known for uncompromising, brutal wars where nothing is held back.

Madge’s last meeting with Mynhardt ended controversially but will always be a loss on his record. In the build up to November 7’s GrandWest showdown, Madge’s silence seems to point to one thing; a battle with absolutely everything on the line.