Split Down The Middle 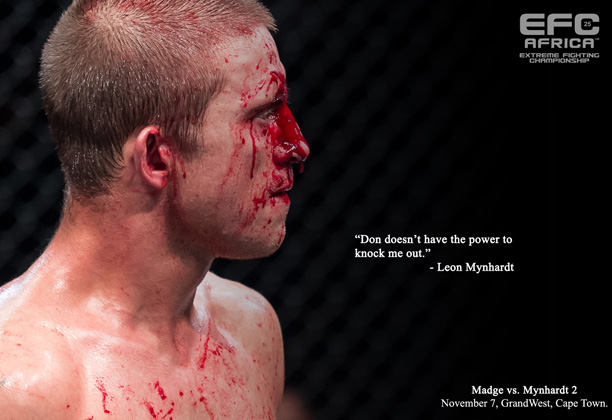 Johannesburg, South Africa – This morning a quote from Mynhardt was released to the media where the ‘Iron Lion’ stated that Don ‘Magic Man’ Madge doesn’t have the power to knock him out.

Facebook is now churning with opinions on how this fight will go. Here are a few:

“It’s going to take A LOT to knock Leon out. But I do suggest that Don gets a stronger mouth gaurd for this fight to avoid any further excuses.” Nicolene Van Der Westhuizen

“I support both fighters, Don is as classy a martial artist as they come, but for this fight I will support Leon simply because Don’s fans dismiss Leon as not being a credible opponent.” – Wesley Visser

“Hope they keep this fight standing so we can see who is the greatest warrior between them.” – David Heynes

What are your thoughts? Add them to the Facebook thread, here.

EFC AFRICA 25, presented by MusclePharm, takes place on Thursday 07 November at the GrandWest Grand Arena, Cape Town. Tickets on sale now at www.computicket.com. Stream the entire event, live an in HD, from efcafrica.tv.