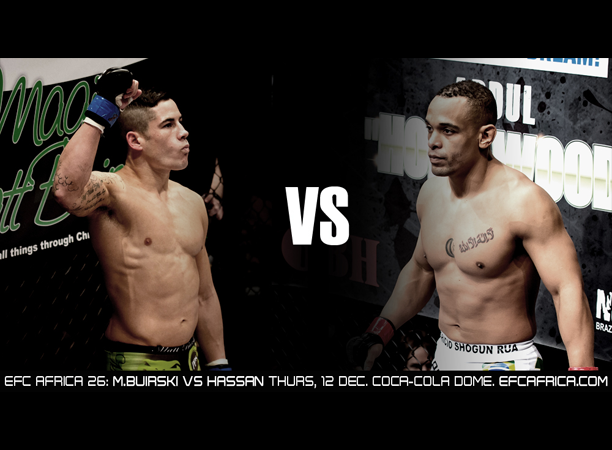 Johannesburg (South Africa) – Abdul Hassan is making the drop to bantamweight to take on Mathew Buirski at EFC AFRICA 26.

Hassan last entered the Hexagon against featherweight champion Demarte Pena. There an ankle injury prompted him to abandon the bout.

Hassan was always an exceptionally powerful featherweight. At bantam he will be maximizing his strength.

M. Buirski made his Hexagon debut at EFC AFRICA 20, beating Marino Cutendana by unanimous decision. He followed that up with a first round submission victory of Donnovan Wilken at EFC AFRICA 22.

Buirski is known for dropping big weight to hit the bantamweight mark. He is an athlete just as powerful, if not more so than Hassan, but is yet to be successful in making weight. He has said that a diet issue and shortened preparation time were the main reasons before. Both are not a factor in the lead up to this bout.

EFC AFRICA president Cairo Howarth has commented that the first bantamweight title fight could be seen early next year. When Buirski and Hassan meet on December 12 two powerful talents stake their claim to that title shot.