Drotschie takes another step towards greatness 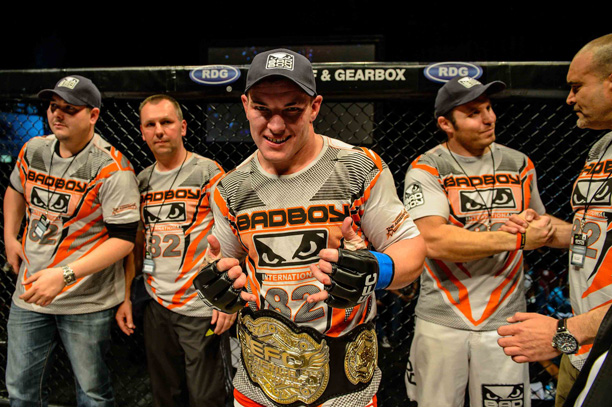 Johannesburg (South Africa) – At EFC AFRICA 25 Gideon ‘Juggernaut’ Drotschie smashed his opponent, and his critics, with a win that has cemented him as the best of Africa’s light heavyweights.

The fact that Drotschie is relatively young to the sport of MMA, having only taken it up three years ago, and that he’s undefeated in both his amateur and professional career, has sometimes gone unnoticed.

He became light heavyweight champion by taking a vacant title. He put on a war with Danie van Heerden to claim it, but the victory was not as sweet as dethroning the man who had fought for it before.

Fraser Opie’s entrance into the EFC AFRICA arena was the bringing of the test that Drotschie needed. Opie is a multiple UK champion with extensive international experience. He has fought and trained in the most hallowed gyms and arenas on the planet.

Standing in the Hexagon moments before the buzzer, facing the far bigger man (Drotschie does not cut weight to compete at light heavyweight), Drotschie tore a ligament in his ankle. That didn’t stop him.

In the first round it was clear that Opie is all the power and skill he’s been labeled. Drotschie weathered the storm, and his ankle, and patiently turned the tide.

In the second Drotschie took his opponent down, took full mount, and began laying down hard GnP until referee Wiekus Swart called an end to it.

In defeating Opie Drotschie has cemented his champion’s status. He is an athlete with massive achievements under his belt who is literally just getting started. The man from Kuilsriver is building a legacy, one that stretches far ahead of him.

Who will this man fight next? What will that fight reveal of just how much Drotschie has inside him? With 2014 rolling closer it’s a question that will soon be answered.

EFC AFRICA returns to the Coca Cola Dome, Johannesburg, for EFC AFRICA 26, presented by MusclePharm, on Thursday 12 December. Tickets on sale now at computicket.com. Stream the entire event live, in HD, at efcworldwide.com/efc_africa_404.php.