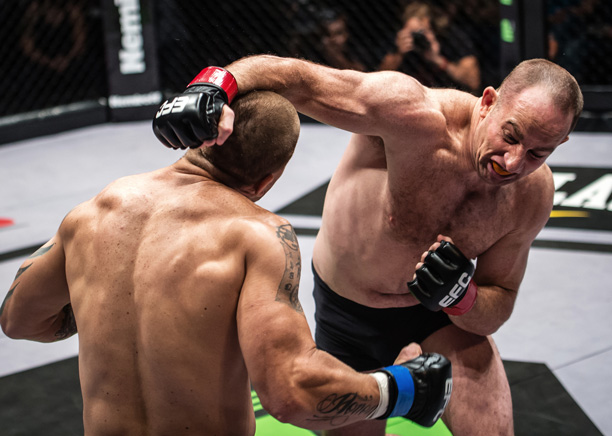 Cleland in action against D. Hawkey

Johannesburg (South Africa) – Liam Cleland is an unknown element. He is the only man, apart from current middleweight champion Garreth McLellan, to have beaten former champ Jeremy Smith. He demolished Donavin Hawkey by brutal elbows in his last appearance, and is returning to the Hexagon after an absence of nearly a year.

Cleland was last scheduled to face Garreth McLellan at EFC AFRICA 20. There he accused ‘Soldierboy’ of growing his beard to hide his glass jaw, and baited him further by releasing videos on the net.

Cleland is an athlete with a phenomenally complete skill set. His grappling competition victories, where he entered on the spur of the moment having not trained in months, and put away some of the best grapplers on the continent, are legendary.

Cleland had to pull out of his bout with McLellan with a groin tear eight days before fight night.

Had he won that he would have faced Smith for the title. On December 12 he takes the first step in earning his matchup with McLellan when he clashes with Jason Culverwell.

Cleland is a unique fighter. He is unpredictable and brutal. What does he have in store for Culverwell, and is the man from Richard’s Bay ready for it?