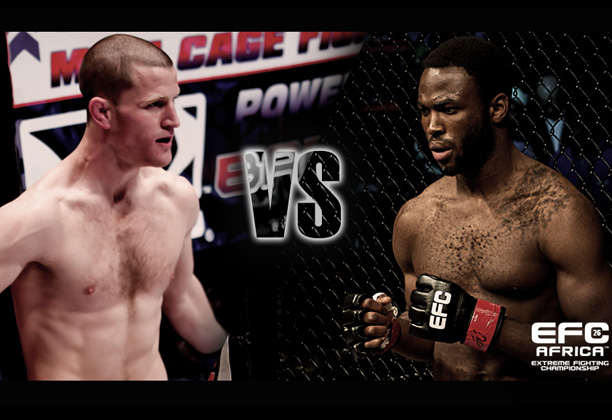 Fadipe is relatively new to the Hexagon. He made his debut at EFC AFRICA 19 against the universally feared Tumelo Maphutha. Fighting at catch weight, and encountering the size of the EFC AFRICA experience for the first time, Fadipe fought ‘The Truck’ to a split draw, a profound result when considering the amount of trouble Maphutha gave to McLellan and Kruger.

At EFC AFRICA 23 he fought again, and revealed another side to his skills. Facing the hugely rated Martin van Staden and in the pressurized wake of massive intercontinental smacktalk the 22 year old Fadipe dominated. Inside one round he had the Punisher tapping to an ankle lock, after blistering exchanges on the feet. His victory caused African MMA fans to take serious notice.

Speechly is one of the best. A former champion he has pushed the greatest far beyond their limits. He lost his welterweight title to Dallas Jakobi in a brutal five round war that was closer than close. He followed that with a drop to lightweight and another decision encounter with then champion Costa Ioannou, a bout that had Ioannou close to unable to support himself out of the Hexagon.

At EFC AFRICA 19 he faced Martin van Staden on short notice, and dominated. Having returned from overseas travels and time away from MMA he revealed a re-invented athlete. A Speechly with the grit of old but added to it a calm maturity and a striking game honed to scalpel perfection.

When Fadipe meets Speechly at EFC AFRICA 26 it will be the biggest test of his career. For Speechly, Fadipe is an iceberg of a challenge of which only the tip has been shown so far.