What will separate Van Zyl & Potts at EFC AFRICA 26? 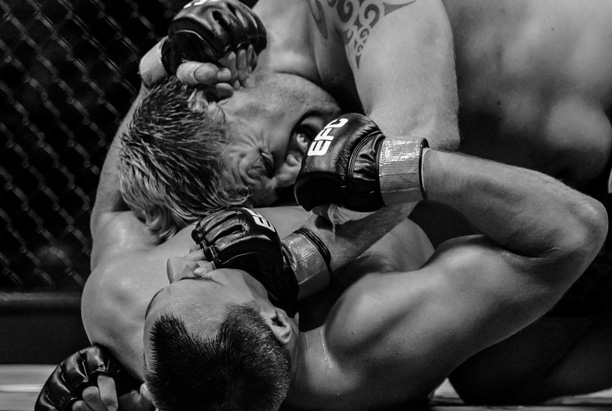 Johannesburg (South Africa) – When Andrew van Zyl defends his heavyweight title against Ruan Potts history will be made. Their bout will be Africa’s first title trilogy. On that night the stakes will be the highest Africa has ever seen.

“It’s all about pressure,” said van Zyl in an interview with Fighters Only SA in May this year, ahead of his second meeting with Potts. “You can go into a gym and you can fight fantastic fighters, but get inside there under the warm lights and in front of the crowd … it changes. You must be able to handle the pressure.”

Van Zyl knows what he’s talking about. He experienced the first loss of his career to Potts the first time they met, at EFC AFRICA 11.

“I battled mentally the whole day for that fight,” he said. “I battled anxiety. When you wait until ten o’ clock to get out there … by that time I’d completely cooked myself. You should be able to fight twice as long as the fight takes. You should be able to go for 50 minutes. Being able to do that will save you in terms of anxiety. It was a tough fight for me to lose.”

At EFC AFRICA 18 Van Zyl handed Potts his first ever loss, and the doubt that comes with it. Van Zyl knows better than anyone the battle that Potts is fighting in the gym right now.

“I used to have an ‘if it happens, it happens’ sort of attitude,” said Van Zyl. “I tried to convince myself that it’s just about the fight, the experience of it. I realised I needed to ask more of myself than that. It needs to be all or nothing. Understanding that was huge for me.”

At present both men are under huge pressure. Potts is battling the doubt that comes from facing the only man he’s lost to, Van Zyl the need to repeat his performance for the second time against an opponent far more motivated.

On the night of December 12 the victor will be man able to apply the most pressure, but most importantly, absorb it. At EFC AFRICA 26 it’s all about pressure.