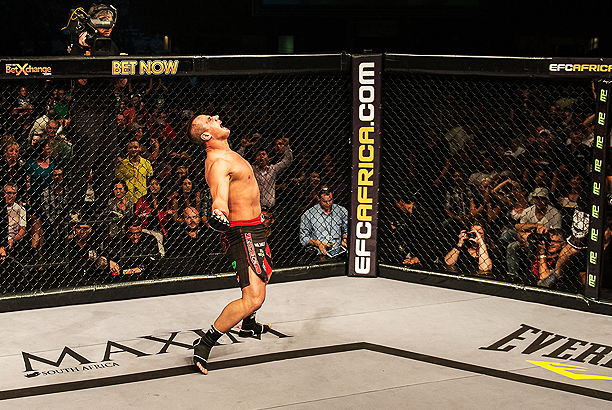 Johannesburg (South Africa) – The final EFC AFRICA event of 2013 delivered exceptional action at the Coca-Cola Dome on Thursday night. No doubt fired up by the return to the iconic venue, all the athletes fought out of their skins in a scorching display of MMA.

The night’s main event was the historical encounter between champion Andrew van Zyl and challenger and former champion Ruan Potts. It was the African continent’s first title trilogy, the final instalment of a three year rivalry between the continent’s two greatest heavyweights.

Anticipation for the bout was at fever pitch as both athletes made their way to the Hexagon. The last time these two faced each other an umcompromising five round decision war was delivered. Tonight could not have been more different. Potts closed the distance, took Van Zyl down with a powerful hiptoss, and scored a submission victory with an armlock that had Van Zyl tapping to avoid serious damage.

Nigeria’s Ireland-based Henry Fadipe entered his bout with former champion and favourite Michiel Opperman. Opperman is renowned for unexpected performances and put on a dominant battle in the first two rounds. Fadipe knew he had to finish the fight in the third round to take the victory, and did so; delivering two short elbows that knocked Opperman out cold.

Liam Cleland returned to the Hexagon after nearly a year’s absence to face Durban’s Jason Culverwell. Cleland, a renowned submissions specialist, waged a strategic and effective war but lost gas in the third round. Culverwell took the opportunity to land multiple strikes, cutting Cleland and certainly winning the final round, but not doing enough. Cleland took the bout by majority decision.

Abdul Hassan dropped to bantamweight for the first time to face Matthew Buirski. Hassan is known for strategic, low action battles, but on the night both men turned on the pace with a blistering display of kicks from Hassan and punches from Buirski. Advantage swung back and forth, culminating in the delivery of a split draw decision by the judges.

Peter ‘Kratos’ Nyide faced the might of Alain Ilunga with four bouts behind him, and zero wins. He revealed a different animal at the sound of the buzzer, swarming all over Ilunga with multiple, powerful strikes, dominating the legendary kickboxer both standing and on the ground. Taking his bout by unanimous decision, Nyide announced himself as a massive new personality, and threat, in the featherweight division.

The knockout of the night award went to Hanru Botha for his thumping short right knockout of Kanyeba Anicet. The fight of the night was given to enthralling standing and striking encounter between Matthew Buirski and Abdul Hassan. Submission of the night went to new heavyweight champion Ruan Potts for his armlock submission of Andrew van Zyl, 44 seconds into round one.