Ilunga VS. Nyide For FOTN 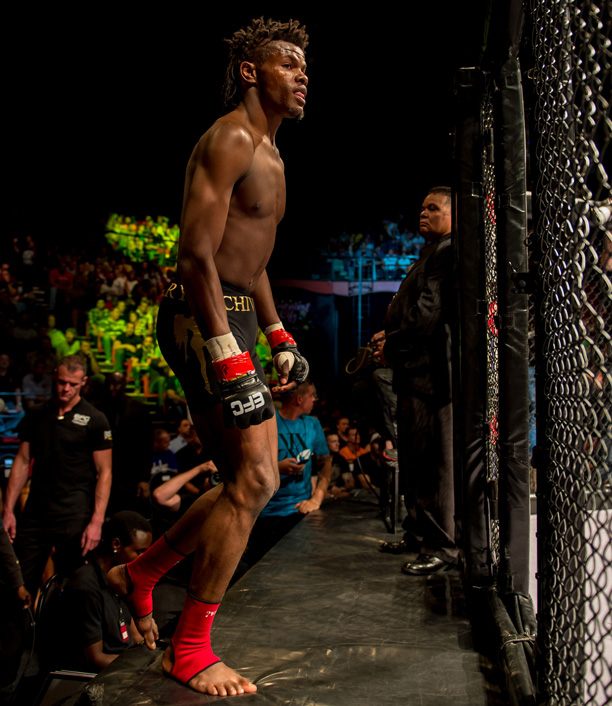 Alain Ilunga steps into the Hexagon at EFC AFRICA 24

Johannesburg (South Africa) – EFC AFRICA 26 hits the Coca-Cola Dome in just nine days. Heading the card is the epic, African first, title trilogy bout between the two most dangerous men in Africa; Andrew Van Zyl and Ruan Potts. 12 more bouts are presented before the big men finally meet. Number one lightweight contender Frederich Naumann took time to outline his big battles of the night, and why.

“Peter was my first fight, so I have a good idea of how talented he really is. What really impressed me when I fought him is the speed of his hands, and how quickly he closes the distance. I remember throwing a kick at him, certain that I was out of range of his hands, and suddenly being rocked by an overhand right. His ground game is very good also. Hanru Botha, who trains out of my gym fought him, and told me after that he seriously underestimated Peter’s ability on the ground. Hanru is a commonwealth wrestling champion and couldn’t put Peter away, which also says something about how intense Nyide’s fitness is. Of course Ilunga has devastating kicks, and he is very aggressive, but I don’t think his kicks will be the antidote for Peter’s hands. I always believe hands are faster than feet, and in this case more dangerous. I think this fight will be a standup war, and that Peter will finish for the victory. I put my money on Peter.”

“This is going to be an excellent fight. Johan is a beast. He is one of the most underrated athletes around. He has incredible skill standing and on the ground, but is sometimes let down by his fitness. If he is fit for this fight he is going to be incredible. Kabesa has very, very good wrestling, but he is going to underestimate how good Johan is on the ground. I still think, though, that Kabesa will take it if the fight goes down, but Johan will take it if it stays standing. Johan’s standup is too good, he’s too experienced. Johan will be going for the technical or straight knock out.”

“Hanru fights out of my gym so of course I’m interested in his fight. He respects Kanyeba, who was a pro boxer who has very good hands, but there is no way Kanyeba will be able to handle Hanru’s takedowns and ground game. For me there is no one in African MMA that can defend Hanru’s takedowns. As a wrestler he is incredibly skilled. He will take Kanyeba down and work him from there. I predict a ground based victory for Hanru.”

Naumann’s award of the night picks are: