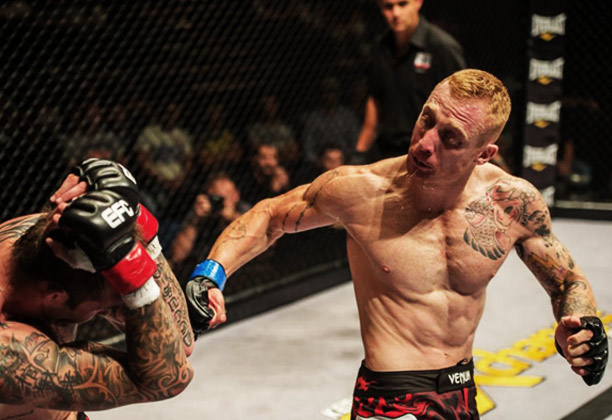 Johannesburg (South Africa) – It has been confirmed that number one middleweight contender JP ‘Tinkerbell’ Kruger will challenge middleweight champion Garreth ‘Soldierboy’ McLellan for his title at EFC AFRICA 28. The event is to take place on Thursday, March 27, 2014, at the Coca-Cola Dome, Johannesburg.

Kruger secured his number one contender spot with a sensational victory over Tumelo Maphutha at EFC AFRICA 22. Reduced to one functional leg after a series of brutal outside legkicks by Maphutha, Kruger went down to a barrage of punches against the fence. Refusing to give up he snagged an arm of Maphutha and executed an out of the blue armbar, breaking his opponent’s collarbone in the process.

Kruger is as yet undefeated in the EFC AFRICA hexagon (5-0). He is currently at a training camp in Thailand preparing for his title belt.

The MMA news site KNUXX caught up with him recently, and published this interview on his camp in Thailand and his thoughts on his coming bout.

EFC AFRICA returns to the Coca-Cola Dome, Johannesburg, for EFC AFRICA 28, presented by MusclePharm. Tickets on sale soon at computicket.com. Stream the entire event live, in HD, from efcworldwide.com/efc_africa_404.php.