Everything To Fight For 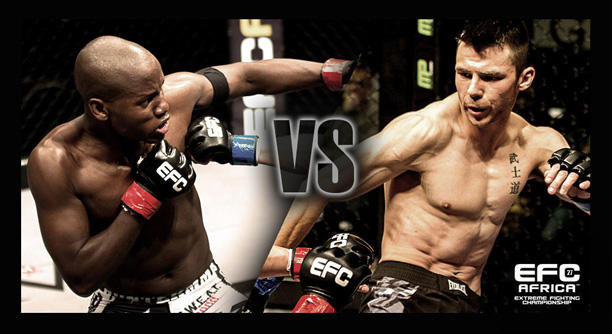 Johannesburg (South Africa) – On February 27 Durban’s Baldwin Mdlalose clashes with Johannesburg’s Donnovan Wilken at bantamweight. In a division that is not yet a year old, and has recently become one of the toughest in the organisation, both men have everything to fight for.

Mdlalose entered the EFC AFRICA Hexagon with a formidable reputation. A two time amateur champion and number one ranked bantamweight in Kwazulu Natal, he found competition in the continent’s premiere organisation a different beast entirely. African wrestling champion Pierre Botha bested him in his first bout, and the powerful Cedric Doyle took the win against him at EFC AFRICA 26.

Donnovan Wilken made his debut in EFC AFRICA’s first ever bantamweight bout against current title contender Charlie Weyer. There he lost out by a narrow margin on a split decision. In his second appearance he faced February 27’s second title challenger, Nkazimulo Zulu, and took victory by unanimous decision.

Thereafter, however, the phenomenal power of Matthew Buirski and the celebrated ground skill of Francois Groenewald were his downfall.

“Wilken and Mdlalose are excellent athletes operating in a very deep division,” said EFC AFRICA president Cairo Howarth. “They’ve got their backs against the wall at the moment, which means they’ll be fighting the bout of their lives on the night.”

In March last year, when the bantamweight division was formed, only four athletes were registered. Today 15 men are on the books, many of them soon eligible for a title shot. A win for either Mdlalose or Wilken will put back in a playing field that is wide open.