Moyo to take on the ‘Guru’ 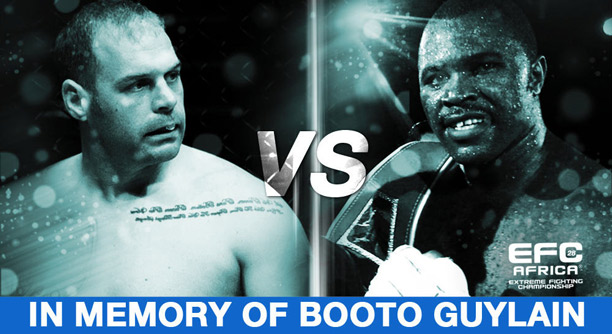 Moyo carries a pro boxing record of 4-5-2 and boasts the scalps of Osborne Machimana and Danie Venter. He will bring a brutal level of punching power and artistry to this bout.

Grobbelaar has developed his full MMA abilities to the level of competing with Bernardo Mikixi in ground combat, and dominating him there. He is however a natural striker.

In displays such as his legendary standing war against Ricky Misholas, the quick KO demolition of Tiny Strauss, and the blizzard of punches that had former heavyweight champion Andrew van Zyl reeling, he has shown that standing and striking is what he loves, and where he is absolutely deadly.

When these two men meet the odds are that the battle with stay on its feet. While Moyo will have the pure boxing edge, will he be able to compete with Grobbelaar’s intimate understanding of kicks, elbows and knees?

In the heavyweight division, more so than any other, it’s one punch that can make the difference. Both men have that punch at their disposal whether it comes in the first round or the third. With chins equally tested, and each with the stamina to go the distance, Grobbelaar vs. Moyo will be an uncompromising war.

EFC AFRICA 28, presented by BetXchange.com, takes place on Thursday 27 March 2014 at the Coca-Cola Dome, Johannesburg. Tickets on sale now at www.computicket.com. Book your cinema ticket to all 13 fights live and in stunning HD at Ster-Kinekor.com. Available in Cape Town, Johannesburg and Durban.