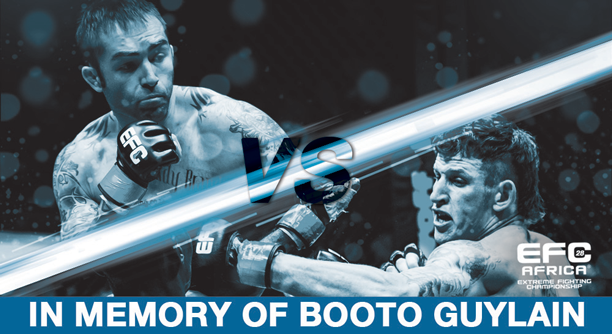 Debuting in April 2012 Culverwell made an instant impression with a victory over Egyptian Mahmoud Salama, ending the bout by keylock submission. He followed that with an enormous encounter with Nigeria’s Raymond Ahana, going three rounds, and this time taking victory by TKO.

Thereafter Culverwell suffered losses against Van Heerden and Lamprecht. His response was a change in camp, moving from the isolated town of Richard’s Bay to the top environment of Duban’s Gorgeous Boyz Hardcore (GBH) gym, home of EFC AFRICA stars Abdul Hassan, Dallas Jakobi and Peter Nyide. In December 2013, after only a few weeks at his new setup, the change showed when he battled Liam Cleland to a bloody decision loss that many feel could have been judged the other way.

Henderson is a stalwart of the Hexagon. He first appeared at EFC AFRICA 01 and since has featured in a phenomenal 14 events. Always a threat, and with the legendary scalps of McLellan and Maphutha behind him, he too suffered a drop of form in losses to Kruger, Kabulu, and D. Buirski. In December 2012, however, he put on a savage performance in a second round submission of Cape Town powerhouse Bruno Mukulu, and announced himself back on top.

Both Henderson and Culverwell have passed through a difficult time in their MMA careers, rolling with fate’s punches. Both have reached the other side of that space and are riding a wave of confidence. On March 27, only one takes the next step toward the top.

Henderson, Culverwell, and all other athletes competing at EFC AFRICA 28 will wear black armbands in honour of deceased athlete Booto Guylain.

FC AFRICA 28, presented by BetXchange.com, takes place on Thursday 27 March 2014 at the Coca-Cola Dome, Johannesburg. Tickets on sale now at www.computicket.com. Stream the entire event, live and in HD, from efcafrica.tv.