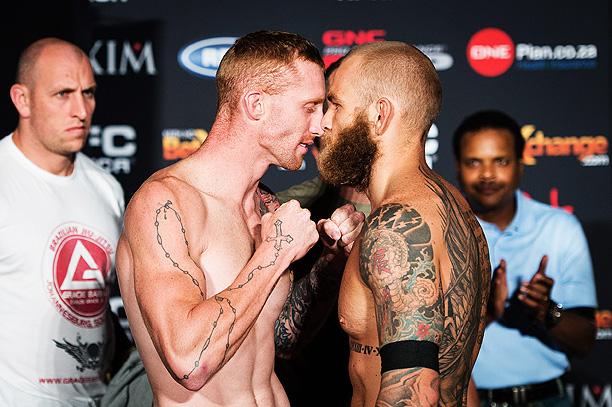 “I’m ready to throw down. Camp’s over, it’s game time now,” said McLellan after, confirming that any smiles he and Kruger had exchanged at media events in the past were long gone.

That same intent swept its way through the ranks. Angola’s Bernardo ‘Black Panther’ Mikixi and the DRC’s top level heavyweight, Christophe ‘Bomaye’ Walravens, shared an eternity of quiet between them, as did Norman ‘Chef’ Wessels in his treatment of Cape Town’s Chris Du Pont.

Du Pont hit the scale 1.95 kilograms over the 93kg light heavyweight limit, a fact that did not impress the former heavyweight champion. Du Pont will take a purse deduction in order to compete, and will not cut further weight.

The hugely anticipated rematch between heavyweights Vandam Mbuyi (DRC) and Brendon Groenewald(SA), had the crowd cheering as the big men shook hands cordially, stark contrast to the end of their first encounter where Mbuyi suffered a disqualification after an illegal foul.

Tomorrow night’s first main card bout features the African MMA debut of Cape Town born Muay Thai world and Chinese MMA champion Irshaad Sayed, up against Johannesburg legend ‘King’ Leo Gloss. Sayed came out with a grin, on his head the crown of both a world champion and the symbol of his opponent. Making his debut on the back of such a big reputation, Sayed will be fired up for tomorrow night.

Gloss was the second athlete to miss the weight limit. Hitting the scale at 62.2kg, 1.2 over the bantamweight cut-off, he also took a purse deduction to allow him to compete.

Fast rising favourite Regis Muyambo added colour by walking out in an improvised school uniform, a nod to his Alma Mater Wynberg Boy’s High School. Muyambo faces Texier Kabesa, multiple South African wrestling champion and the only man to have beaten Muyambo – when they met at amateur level previously.

All athletes and officials wore a black armband, in memory of deceased EFC AFRICA athlete Booto Guylain. Tomorrow night’s event is to held in his honour.