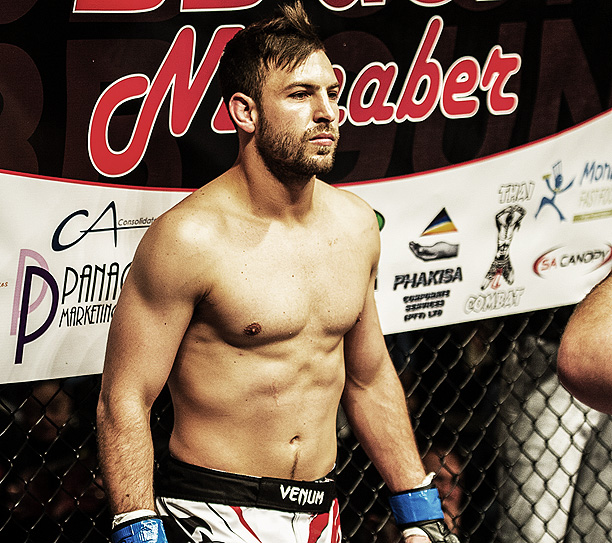 Johannesburg (South Africa) – Undefeated Barend ‘BB Gun’ Nienaber faces notorious campaigner Brendon Katz for a featherweight top contender spot on May 01. Last week Katz pulled no punches in putting his younger opponent down. In an interview given today, Nienaber gives as good as he got.

“He’s scared,” said Nienaber, commenting on Katz’s advice that he tap as soon as possible. “It’s a poor chirp. It makes me think that he’s reaching, and just saying anything to up his confidence.”

“Tapping is the furthest thing from my mind,” he continued, chuckling. “I’m going to knock him out. Tapping has no place in my game plan.”

Nienaber reports that his fight camp is progressing excellently, with hard training scheduled at various facilities across Johannesburg daily.

“My sessions with Ruan [Potts, former EFC AFRICA heavyweight champion] are doing a lot for me,” said Nienaber. “Rolling with him is an excellent experience. Dealing with someone of his weight and skill has upped my strength a huge amount.”

Nienaber reports that it’s his weight cut, rather than the thought of facing Katz, that’s his main focus.

“Brendon’s a formality,” said Nienaber. “Right now it’s all about hitting my weight targets every week. Beating Brendon is going to take care of itself.”

A successful car salesman, Nienaber says his customers are a good gauge of how well his weight cut is progressing.

“Nowadays my clients keep asking me why I’m getting so skinny,” he said. “When I sit down with someone I haven’t met before, usually I get a little stare, and then the question, ‘do you fight for EFC AFRICA?’”

Nienaber and Katz have everything to fight for on May 01. The winner of their bout secures a featherweight title shot against Boyd Allen on July 03.