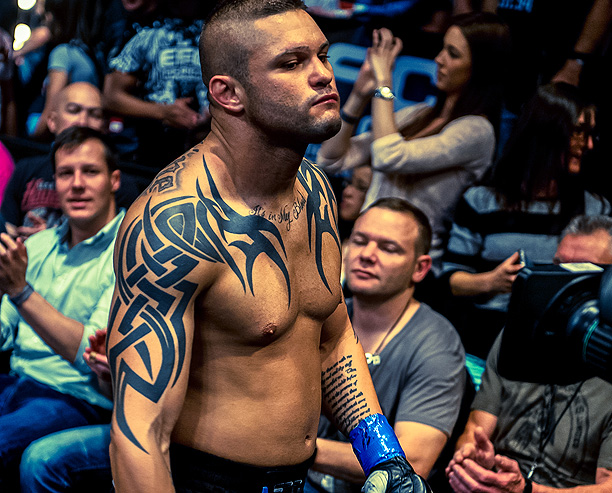 Smith possesses the highly impressive professional MMA record of 11-2. His only two losses are years apart. The first occurred at the start of his career and the second at his last bout. There Garreth McLellan relieved him of the middleweight title – the same title that Smith took from McLellan initially.

On the back of that loss Smith is fired up to earn another title shot. His bout against Opperman is a serious obstacle, however.

With an overall pro MMA record 10-9 Opperman has massive experience to add to his renowned and devastating ground game. Making his first Hexagon appearance in 2011 he went on a tear that took him to an incredible eight fight winning streak, and the welterweight title. His fortunes have reversed since then with three losses on the trot.

With unforgettable wins behind him, as well as the feeling of the champion’s belt around his waist, Opperman is a hair’s breadth from re-entering the victory column.

In this bout he almost certainly possesses the advantage on the ground. Although fighting at middleweight he is a big man with a lot of experience in the heavier divisions. With his long limbs and submissions pedigree he will welcome a ground war.

A standing battle should favour Smith. He is at his best at close quarters, putting his enormous power into disabling body shots and very capable clinch control. Opperman, however, began his martial arts career as a striker, and relishes it.

The meeting of two former champions is difficult to call, and promises a fight impossible to predict. Wherever it takes place both will be committing talents and experience honed in a forge of top level MMA, and the ability to be back at the very top in an instant. This is one for the history books.