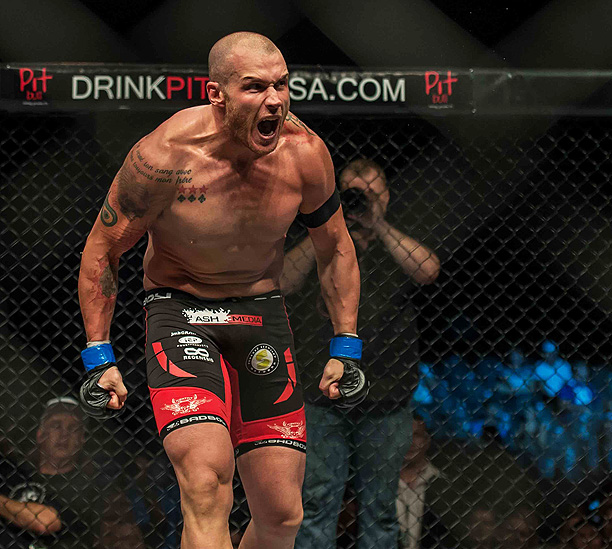 Today Drotschie released a short video making light of the incident. This afternoon Wessels responds, saying that he has no time for childish smacktalk, and that he will be bringing a grim reality to their showdown.

“I understand the gravity of the situation,” said Wessels, after being told about the video. “I can’t let childish games cloud my judgement. I’m not here to grab pony tails and make rap videos [Drotschie often collaborates with Afrikaans rapper Jack Parow]. I’m here to eat, to earn my living, and to put my child forward in life.”

After his title shot winning bout with Chris du Pont on March 27, Wessels was so overcome with emotion that he could not answer commentator Dirk Steenekamp’s questions. Wessels sheds light on his state of mind then, and makes no apologies.

“I am who I am,” he said. “I’ve always been an intense, emotional person. I don’t need to explain myself to anyone else. I let my emotions go in the safest way possible. When I’m put in a situation to fight a guy, it plays a massive impact on my life. Why should the outcome be a certain way? Why should it be a handshake or a high five?”

“I am making sure I’m clear for the fight,” he continued, referring to Drotschie’s baiting. “I need to be clear in order to bring my aggression and intention. I won’t pretend I don’t have my emotions. I will highlight them, I will feed off them. I will be who I am so that when the fight comes, I’m crystal.”

Before Wessel’s last performance he had experienced an almost two year layoff, after being diagnosed with and overcoming a rare blood disorder. He sees that experience as a positive one.

“I’ve learned a lot about myself,” he said. “The time out allowed me to reflect. I’m older and wiser. I know now that if I’m going to be successful in MMA, if I’m going to have a legacy that matters, I can only be true to myself.”

“I’m not the guy who tries to make videos, and talk shit,” he concluded. “It’s just not a game for me. Everything is at risk, my livelihood, my health. I’ll never apologise for who I am. I hope that Gideon understands what’s coming. However the fight goes, he will remember my name.”

EFC AFRICA 30, presented by BetXchange.com, takes place on Thursday 05 June 2014 at the GrandWest Grand Arena, Cape Town. Tickets on sale soon at www.computicket.com. Book your cinema ticket to all 13 fights live and in HD at www.sterkinekor.com. Watch the entire event live, from anywhere on the globe, via online streaming at efcafrica.tv.