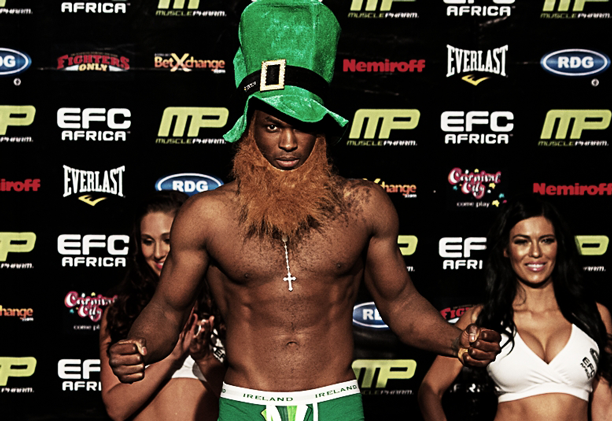 Johannesburg (South Africa) – Yesterday Henry ‘Herculeez’ Fadipe took the opportunity to send out a dash of April Fool’s, and no doubt another dig at champion Dino ‘The Lion’ Bagattin, ahead of their welterweight title clash on May 01.

Fadipe tweeted, “slammed car door on my finger after training. Can’t move it let alone make a fist. #Broken. So, so, sorry guys.”

A fan questioned whether the tweet was true, to which Fadipe replied:

“Unfortunately, bro. Can’t punch, can’t grab or grapple. Not going to risk losing now when I know I can win later.”

Fadipe’s subject matter was perfectly chosen. Last year he was scheduled to face Adam Speechly, a teammate of Bagattin’s, who had to pull out of the fight with a severely split lip.

Uncertainly hung over whether Fadipe would compete, until he calmed the waters with a tweet today:

“Fell asleep. Forgot to say #AprilFools. Dino ain’t that lucky. I did hurt my finger but still gonna bring the WHOOPING!”

Since the moment this bout was signed Fadipe has been taking social media digs at the champion. Whether this tweet was directed at him or not, it’s clear that the Irishman from Nigeria’s having fun training for his biggest fight, and is full of confidence.