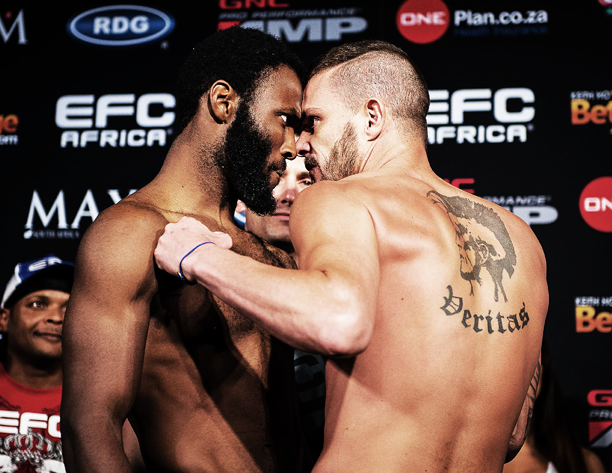 EFC AFRICA 29 features a tightly stacked card of 11 bouts between 22 of Africa’s most skilled mixed martial artists, all of whom faced-off today.

The crowd roared for Johannesburg local and welterweight champion Dino Bagattin, who defends his belt against the Nigerian Henry Fadipe tomorrow night – Fadipe living and training in Ireland.

The stare down between the two men was ominous, the mood of the room growing perceptively colder as the two locked eyes. Fadipe had been baiting the champion by any means over the last weeks, the champ taking it all good naturedly, until today.

“Fadipe came to my country, to my gym, to take my belt. It’s showtime!” Shouted the champion afterward.

Fadipe appeared in a full length lion costume, a final dig at the champion’s fight name ‘The Lion’, but despite his confidence missed the welterweight cutoff by 200g. He had two hours to cut the weight, which he did with ease.

Brendon Katz and Barend Nienaber battle for the featherweight number one contender spot tomorrow night, and drew the crowd in with an intense promo video before their appearance.

“He gets to choose where he’s going to lose this fight,” said Katz. “Standing or on the ground, it’s all the same to me.”

“I’m coming with aggression,” countered Nienaber. “I will be taking this fight.”

Former middleweight champion Jeremy Smith, who begins a return campaign to the belt tomorrow when he faces former welterweight champion Michiel Opperman, revealed a new breed of beast with a tightly shredded physique.

“I’m fit, and I’m ready,” said Smith after. “I want my rematch with the champ [Garreth McLellan].”

Standout moments further down the card were the brutal intent shown by Mark Hulme who battles Morne Prinsloo tomorrow, local favourite Gordon Roodman making his EFC AFRICA debut, and the sensational return of Dewald Botes. Botes last fought at super heavyweight and has cut a phenomenal 34kg to hit the 120kg heavyweight mark for his battle with the DRC’s Ricky Misholas.

“The last time I weighed this was in matric,” said a grinning Botes after. Botes expects to put 10kg’s back on before his bout tomorrow, meaning he will have a massive advantage over the lighter Misholas.