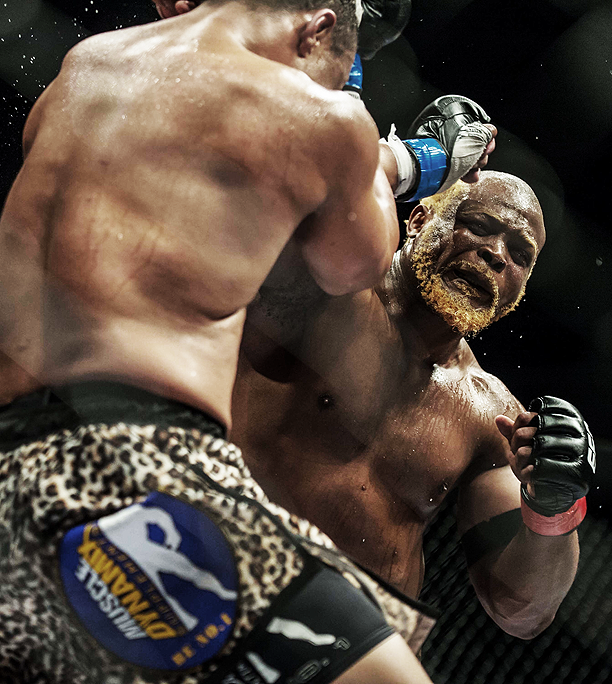 Johannesburg (South Africa) – The internet has been buzzing with reports of controversy at EFC AFRICA 28 last week, commentary focused on the allegedly late and dangerous stoppage of the Walravens vs. Mikixi bout, the illegal extra padding worn by Walravens in that same bout (as well the presence of ‘Thai oil’), and the alleged incorrect reset in the Gloss vs. Sayed bout.

EFC AFRICA president Cairo Howarth released his views on the matter on Friday, and today the first part of an official inquiry was concluded after an official complaint was laid by both Mikixi and Gloss’ camps.

A ruling on the late stoppage in the Walravens vs. Mikixi bout is still pending, as the officials have asked for another opportunity to review the footage.

The officials have found that Walravens’ use of extra padding and the application of oil was illegal, and have ruled the bout a ‘No Contest’ with a further six month suspension for Walravens. They have found no fault with the Gloss vs. Sayed reset.

The detail of their findings is as follows:

With regards to the padding, it is illegal and in following both the IMMAF rules and Unified rules of MMA it results in a disqualification. The same applies in the matter regarding the liniment oil.

The Unified Rules of MMA State:
– Shoes and any type of padding on the feet are prohibited during competition.

With regards to the effect it had on both athletes, we feel that it assisted both athletes in cushioning the blows rather than forming any sort of cast and causing damage.

Further investigating the number of kicks thrown between round 1 and 2, we found the following:

Round 1: 22 kicks thrown (4 landed by the ankle of Walravens, the balance on the shin).

Equating to three kicks per minute on average which would equate to approximately 15 kicks thrown in round two. Considering that the athletes were more engaged than in round one and at closer range to engage with their hands, we find it [the padding] in no way relevant to the amount of kicks thrown without padding.

In addition, upon investigation of the padding backstage on the evening in the medical suite, there was no evidence of any hardening agents. No compression or setting had happened. It was merely padding. There was certainly no “Plaster of Paris”, and we believe it was in reference to a comment made by the commentator as an opinion.

Even though we would like to believe that Walravens did not intentionally break the rules, the facts are that two rules were broken [padding and oil] and should result in a disqualification and six month suspension. However, we failed to disqualify him on the night leaving us with no option other than calling the bout a ‘No Contest’ and enforcing the six month suspension.

Regarding the ruling regarding a restart, we were satisfied with Ian Pienaar’s decision.

The IMMAF Rules State:
– 22.1 After a warning has been issued or an examination has been conducted by the contest        physician the match shall be restarted in the same position as before it was interrupted.
– 22.2 The referee can restart the match in a neutral standing position if the contestants are in a        stalemate, aren’t actively seeking to better their position or aren’t actively attempting to win.


The IMMAF rules are the only precedent, as the Unified Rules of MMA do not cover this aspect of MMA combat.

Despite contrary belief, footage shows that the combatants were not restarted “in a submission”. They were in exactly the same position as before and Irshaad changed hand positions and grip whilst Leo was striking rather than defending.

“As officials, we are there to ensure fighters safety and enforce the rules,” said Jason Bezuidenhout, regarding the decision to suspend Walravens for six months. “We need to be consistent and eliminate interpretation as much as possible. This was not a decision we took lightly, but do believe it’s the right one.”

“I’m glad a complaint was lodged and the event officials were given the opportunity to do an official inquiry,” said Cairo Howarth. “It’s testament to the health of African MMA that our regulation processes are functioning well, and that all players involved are being held accountable.”

“That said,” he continued, “we as the EFC AFRICA organisation are unhappy with the ruling to suspend Walravens for six months. We respect the association’s findings, but will be lodging an appeal asking that the suspension be reviewed. Walravens is one of our top heavyweights and we would like to see him in competition. Of course the official’s findings will be final, and we will abide by whatever they decide.”