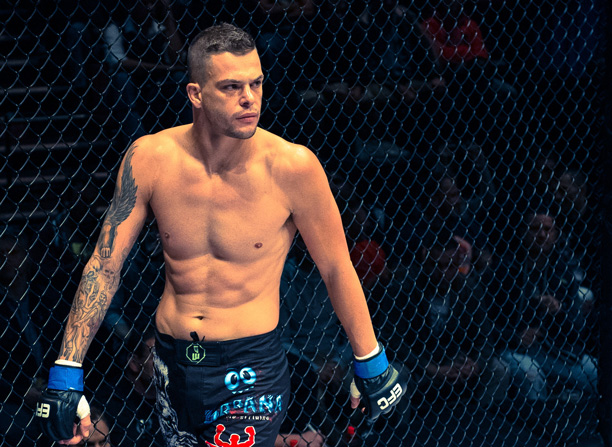 Johannesburg (South Africa) – Welterweight champion Dino ‘The Lion’ Bagattin fought for EFC AFRICA at the very first event. He has been with the promotion through every evolution, while evolving himself. Initially a strictly stand-up athlete Bagattin has carved a MMA style that complements his dazzling strike attack, through hours and hours in the gym.

Neil Rooke of themmacorner.com talked with the ‘Lion’ ahead of his historical title defense this Thursday, and sketched out the champion’s long, hard fought road to EFC AFRICA 29. Selections of Bagattin’s words are reprinted below. See the full article here.

“Obviously I’m anxious. I’m nervous and excited. All the normal pre-fight jitters are there. The magnitude of this fight, though – nobody has been able to defend this welterweight title. I’m planning on being the first one to do it. I respect Fadipe. He’s a tough opponent. They call him a finisher, and I respect that, but I’ve got my goals in place and I’ve been working hard. I’ve trained for this fight as if I am the challenger. To keep myself relaxed, I tell myself it’s not about a belt, it’s just a fight. I’m excited, and I am sure me and Fadipe are gonna put on a hell of a show. I want to show that I have become a well-rounded fighter. I have put in a lot of time on the mat, and I want to put on a full display of my full MMA arsenal.”

“In my first three fights in the EFC, I didn’t really have any ground game. I didn’t really understand and I wouldn’t even say I was a white belt level in jits. I kinda just winged it. Sprawl and brawl were my tactics, and that’s kind of become my game plan now. Obviously, I’ve been working a lot harder on my wrestling and my jits. I like to stand to fight—that’s what the crowd loves and I aim to please the crowd.”

“I grew up in South Africa. I lived here most of my life. When I finished school, like most kids, I didn’t know what I wanted to do. I went off to the U.K. and spent eight years there, working hard on the London Underground slaving away with the rest of the Aussies and Kiwis. I was always drawn to combat sports, and I started Thai boxing just to keep fit in the rugby off-season and I just loved it. I soon found myself fighting amateurs, and I went on and won an amateur title. I then turned professional and went on to win the British Muay Thai title and the [ISKA] Commonwealth Muay Thai title.”

Get regular updates from Bagattin and his preparations on Twitter at @HandsOfStoneMMA.