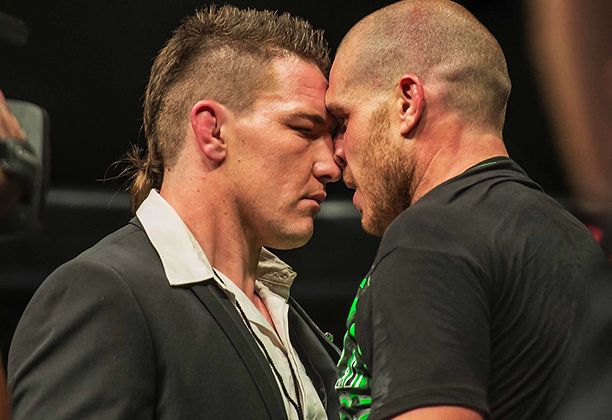 Johannesburg (South Africa) – On June 05 Cape Town sees both of their champions go to war for EFC AFRICA gold. Gideon ‘Juggernaut’ Drotschie will defend his light heavyweight title against Norman ‘Chef’ Wessels, and former champion Don ‘Magic Man’ Madge will look to retake the belt that current champion Leon ‘Iron Lion’ Mynhardt relieved him of at their last encounter.

The war between Drotschie and Wessels has already begun. On March 27 Wessels earned the right to face Drotschie by defeating Chris Du Pont. Immediately after the champion entered the Hexagon to congratulate the new contender, but Wessels had other ideas and engaged. A tense clash of head followed, after which a still hyped up Wessels took it a step further and pushed the champion. A steaming Drotschie held his composure on live, global television, but the anger in his eyes was obvious to all.

“If he thinks he just had a fight,” said Drotschie in an interview after, “wait until he gets into the Hexagon with me.”

Drotschie is undefeated. In his title bout he was dubbed the underdog against UK champion Fraser Opie. A bad call as he took his opponent out by ground and pound in the second round, despite having torn his Achilles tendon moments before the fight began. His underdog tag is now gone. Today he is the undisputed King of Africa’s light heavyweights, despite being easily capable of cutting to middleweight if he chooses.

But Wessels is his toughest test. A former heavyweight champion, and two time title contender he brings a level of experience, skill and savagery that Drotschie has not yet faced in the Hexagon. With both supremely skilled in all areas of MMA, with both steaming from a personal attack on live, global television, this will likely be a war of attrition, and has the makings of one of Africa’s unforgettable title encounters.

Mynhardt vs. Madge 3 seethes with tension. The ‘Iron Lion’ is Madge’s greatest nemesis. He is only the second man to have beaten him, the other a Muay Thai world champion. They have faced each other twice and on both occasions, despite throwing everything at him, Madge was unable to put him away.

In their first encounter Madge ripped Mynhardt apart with surgical striking that left deep, bleeding gouges across Mynhardt’s face. At the close of the first round Madge landed a head kick that dropped Mynhardt, but it wasn’t enough. Afterward Madge acknowledged his mistake and said that he should have gone to ground and finished Mynhardt there.

At their second meeting he did exactly that, refusing to stand with Mynhardt. At the close of the third round he sunk a textbook rear naked choke, deep and well set, and squeezed for all he was worth. Viewers around the world stared in disbelief as, for nearly 30 seconds, Mynhardt rode the choke, refusing to tap, and ultimately survived.

With Madge and Mynhardt it goes deeper than skill on paper. Each offers the other the ultimate, soul defining battle. With two controversial decisions behind them, decisions that each camp will bitterly defend, only a decisive finish will settle the score when they meet for the third time.