Groenewald VS. ‘The Bomber’ For NO. 1

Heavyweight title shot on the line in Cape Town 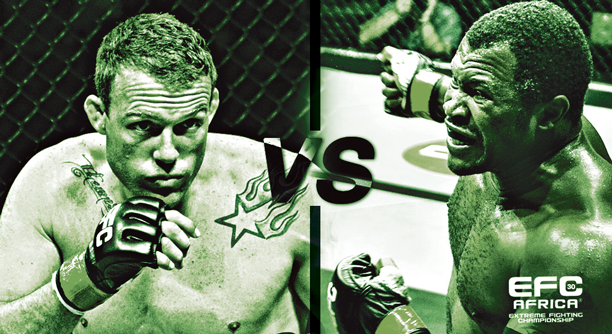 Johannesburg (South Africa) – Cape Town’s June 05 card is shaping up to be a massive event with another explosive top of the table clash added today. Local man Brendon Groenewald is to collide with Zimbabwean born, African boxing heavyweight champion Elvis ‘Bomber’ Moyo for a shot at the vacant EFC heavyweight title.

Groenewald sealed his top of the division status at EFC 28 with a ferocious second round victory by tapout over then number one title contender Vandam Mbuyi. Riding a three fight win streak Mbuyi was the man to beat, and Groenewald displayed all the attributes of a champion by weathering a ferocious storm from his far more powerful opponent. He absorbed a crunching knee to the head, before finally putting Mbuyi away with excellent ground technique.

Groenewald’s talents extend to the striking arena also. In November last year he stood and traded with Angola’s wrecking machine, Bernardo Mikixi, for a full three rounds before narrowly losing out on points. Mikixi was put forward as a chance at redemption for Groenewald at the June 05 event. The ‘Black Panther’ is injured, however, leaving the road open for another beast entirely to step in.

African heavyweight boxing champion Elvis ‘The Bomber’ Moyo is fresh from a sensational win over former title contender Sors Grobbelaar. In that bout, his first professional MMA appearance, he out-fought Grobbelaar to take a points victory – the deep bruises across the ‘Guru’s’ ribs a hard reminder of Moyo’s punishing boxing talent. In addition he showed evidence of a natural born combat athlete swiftly absorbing the art of MMA. His solid takedown defense and arsenal of mean kicks were those of a Hexagon veteran.

Meanwhile the baddest man on the continent, Christophe Walravens, is sitting idle due to a six month suspension handed him by event officials after EFC 28. At that event the DRC born, Cape Town resident put on a brutal display against Bernardo Mikixi, crippling Angola’s giant with leg kicks before finally putting him away with hammer fists to take a famous finish. The bout was later ruled a no contest due to extra leg bandaging illegally worn by Walravens, and the six month ban added.

EFC have contested the sentence handed down by officials, based on the official’s own estimation that the bandaging had no real relevance to the outcome of the fight, and was rather a technical illegality. Suspended or not, Walravens is the man to beat and has been pegged as the number one heavyweight contender by the organisation.

The heavyweight title has stood vacant ever since former champion Ruan Potts was put through to the UFC. The winner of Groenewald vs. Moyo will take the heavyweight number one contender spot, and will fight Walravens for the title.

Of course, former champion Andrew van Zyl cannot be forgotten. Van Zyl is currently mounting a comeback for the belt that was once his, and is tearing at the bitt for a chance to fight any man who offers him a path to it. Details on Van Zyl’s comeback bout are to be released soon.