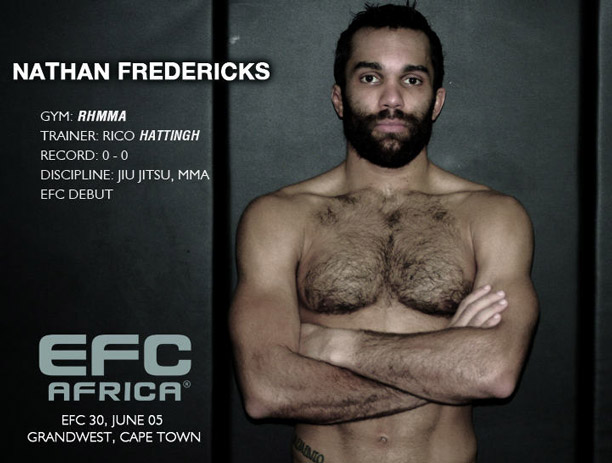 Johannesburg (South Africa) – On June 05 EFC AFRICA returns to Cape Town with a massive card featuring the cream of Cape Town’s fighting talent. Nathan ‘Shake ‘n Bake’ Fredericks, one of the city’s newest and brightest prospects, makes his debut on that night.

“Competing at EFC means validation for all the work I’ve put in and recognition in this sport that I love,” said Fredericks on his debut. “I never started training MMA with the intention of competing at EFC. I decided to go pro because I want to test myself and not let the opportunity pass to find out how good I really am, or can be.”

He began his martial arts with career with Karate at a young age. It was whilst working in Taiwan in 2008, however, that his love of combat took hold with the beginning of Jiu-Jitsu and Mixed Martial Arts training.

Fredericks is now a highly rated competitor on the South African amateur MMA circuit, with a blistering undefeated eight fight run behind him.

“My most memorable fight be against Sibusiso Mdoko [an athlete that now fights on the EFC AFRICA roster],” said Fredericks. “I won by decision but it was a tough fight and I think fight of the night at that event.”

Fredericks trains out of the revered Rico Hattingh MMA facility in Bellville, where he boasts EFC AFRICA light heavyweight champion Gideon Drotschie as a sparring partner, as well as fellow debutant Luke Michaels.

“I don’t know much about Sandile, but we’re doing our research,” said Fredericks on his opponent. “I’m expecting a tough fight. No matter who I’m facing I try to prepare myself like I’m facing the best fighter possible.”

“To win is my number one goal,” he added, “but also to put on a show. Obviously I’d like to get invited back and want to give everyone watching something worth coming for. Hopefully this fight will let everyone out there in the MMA community know what I’m about.”

Both Fredericks and Michaels are undefeated at amateur level, and both will be flying their Cape Town colours high on the night of June 05.