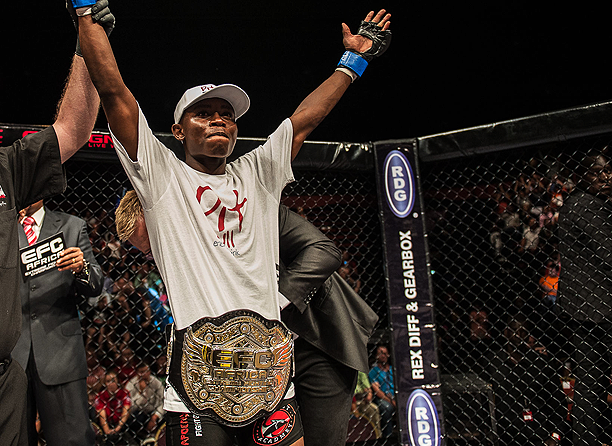 Zulu is a sensational striker that fought his way to the top with a series of unforgettable performances. He knocked Lourens Botes out cold, devastated Craig Ninow with a brutal head kick that was heard around the world, and scored a first round TKO to take the title against Charlie Weyer.

Zulu is an exceptional and continuously improving athlete in every area of mixed martial arts. He dominates Africa’s bantamweights with his fluid and unpredictable style. His opponent, Demarte Pena, is a monumental task.

In a controversial move late last year, Pena relinquished his featherweight belt for a guaranteed shot at the bantamweight title.

His run at featherweight had included a staggering eight fight, undefeated win streak, a record breaking five title defenses, and the honour of being the youngest EFC AFRICA champion in history. If he takes the bantamweight title he will become the first EFC AFRICA athlete to own a title in two weight divisions.

Pena has described the move as necessary for his shot at greatness, having decimated the featherweight division, but in doing so has taken a great risk. If he loses against Zulu he will have to work his way up from the bottom.

“Losing is not a concern for me. I’ve proven that I am a true champion by being the only man in EFC AFRICA history that has been able to defend the belt five times. I understand that anything worth having in life comes with a price.”

On July 03, Pena becomes the challenger for the first time. Zulu is well aware of this, and will be waiting with every finely tuned strike he possesses.

EFC AFRICA 31, presented by BetXchange.com, takes place on Thursday 03 July 2014 at the Cocal-Cola Dome Johannesburg. Tickets on sale soon at www.computicket.com. Book your cinema ticket to all fights live and in HD at www.sterkinekor.com. Watch the entire event live, from anywhere on the globe, via online streaming at efcafrica.tv.