Roodman vs. Mukulu, only at Ster-Kinekor 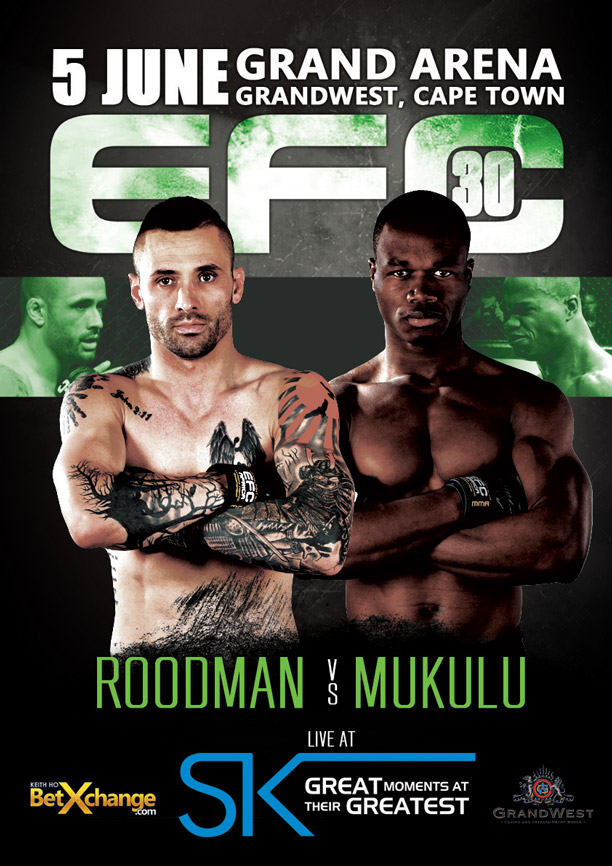 Johannesburg (South Africa) – This Thursday a top of the prelim card clash takes place between Cape Town’s Bruno ‘The Major’ Mukulu and Johannesburg’s Gordon ‘Rage’ Roodman, an event that can only be seen live, or at selected Ster-Kinekor cinemas across South Africa.

This bout has been super charged since the moment the matchup was released, with Roodman promising a massive beat down on social media.

Mukulu is an exceptionally powerful athlete with a huge work rate. Firmly settled in the Hexagon after three performances and now fighting out of a new camp, he is poised to deliver a perfect performance this Thursday.

Roodman, despite only one EFC appearance so far, has already built a big reputation through pro-active publicity and a fighting style that leaves no energy unspent. A legend of the amateur arena, he has promised Cape Town fans an unforgettable display on fight night.

“If he climbs into my guard I will submit him. If he chooses to stand and trade with me I will put him to sleep. If he allows me to get top control, he’s going to get out wrestled, cut up, battered and bruised. I’m so damn pumped up for this one I can’t even explain,” said Roodman in a recent interview.

This top of the prelim card clash can also be streamed from anywhere across the globe at www.efcafrica.tv.