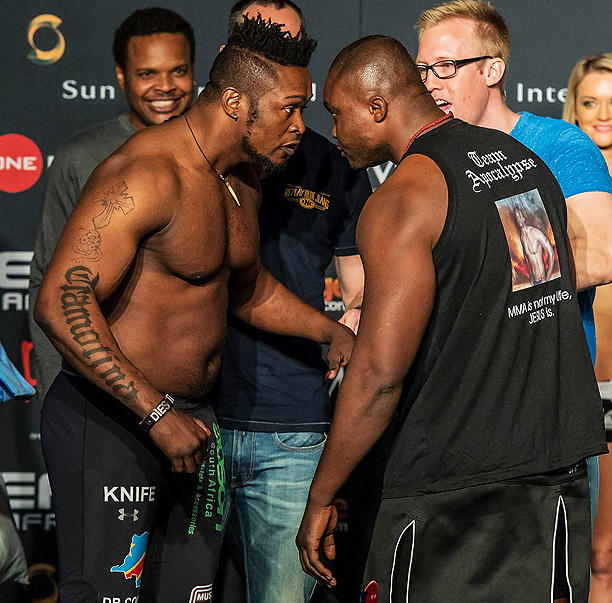 Superstar Don Madge and the unstoppable Boyd Allen from Johannesburg headline the card in an inter-divisional superfight, and had the crowd on their feet when each hit the scale.

Their bout is scheduled at a catchweight of 69kg, which Allen hit squarely but Madge over shot by 650 grams. Madge declined to cut further and has instead taken a financial penalty.

“Let’s get it on,” said Allen in a quick post weigh-in interview. “This is going to be explosive.”

Tomorrow’s event marks the milestone return of world Muay Thai, K1 and Chinese MMA champion Irshaad Sayed. Sayed left Cape Town, the city of his birth, at the age of 17 for Thailand. Tomorrow night he fights MMA (against Charlie Weyer) for the first time in front of his family and friends.

His local fans showed their support by cheering him on when he hit the scale, and his opponent.

Heavyweight ground specialist Brendon Groenewald was all smiles when squaring off with his African heavyweight boxing champion opponent Elvis ‘The Bomber’ Moyo, both men tipping the scales at over 110kg.

The event had its share of controversy. Local favourite Regis Muyambo encountered an intense challenge from opponent and multiple SA wrestling champion Igeu Kabesa during their face off, one which saw them separated by EFC president Cairo Howarth, and had Muyambo warning Kabesa to watch himself tomorrow night.

As always Sibusiso Mdoko made a huge splash with his ever present pre-fight shades, making a meal of facing off against former teammate and lethal kickboxer from the DRC, Alain Ilunga.

The face-off between heavyweight and fellow DRC born men Ricky ‘The Apocalypse’ Misholas and ‘Knife’ Didier was a huge affair. Misholas challenged the debutant hard, both men clashing heads before being separated.