The Fights We’ve All Been Waiting For

Fadipe vs. Speechly, Allen vs. Nienaber 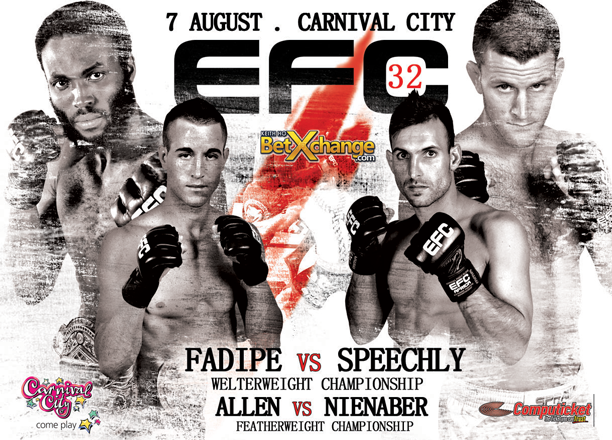 Henry Fadipe has scorched his way to the top of Africa’s welterweights with crushing victories. He dispatched the legendary Martin ‘The Punisher’ van Staden in the first round, putting him out of action for ten months with a torn knee. He obliterated former champion Michiel Opperman with a double elbow clubbing to the jaw that knocked him out cold, and dropped champion Dino ‘The Lion’ Bagattin with a first round right hand to take the title.

Former champion Speechly comes with a searing history of his own. He has fought three title fights, has headlined four times, and been on an EFC main card eight out of his ten EFC appearances.

His last title fixture was an outing at lightweight against the at that time totally dominant Costa Ioannou. Speechly took the champion an unforgettable five rounds, both beyond the limits of exhaustion, and only lost by close decision. In his last appearance he took on Martin van Staden at short notice, and totally out fought him to win by decision.

Speechly is a phenomenally talented, relentlessly intelligent athlete, and a potent threat to Fadipe’s crown. The two were first scheduled to fight at EFC 26. Speechly was forced to withdraw due to injury on that occasion. On August 07 they finally do battle.

Boyd Allen has dominated the featherweight ranks for the last three years, naturally taking on the gatekeeper role for teammate and then champion Demarte Pena, as the two refused to fight each other. When Pena relinquished the belt Allen’s way opened, but not before he faced Don Madge, the lightweight number one contender, in a superfight fought in Cape Town on June 05.

Allen took the fight on three weeks’ notice and battled the heavier Madge to an unforgettable draw that will go down as one of the greatest of all time. He has not lost a round at featherweight, and is on the cusp of finally reaping the reward of years of patience and dedication.

His opponent, Barend Nienaber, is undefeated also. At EFC 29 he was given the chance of a huge step up when he faced the internationally renowned Brendon Katz for a number one contender spot. Katz was the clear favourite before, but was outplayed in every area by a spectacular Nienaber. He smothered Katz with perfect wrestling technique, and afterwards commented “I could have fought in jeans and trainers, it was that easy.”

Nienaber has put in successively flawless performances, each building on the one before. He will be more than ready for Allen, and motivated beyond measure for a taste of gold.