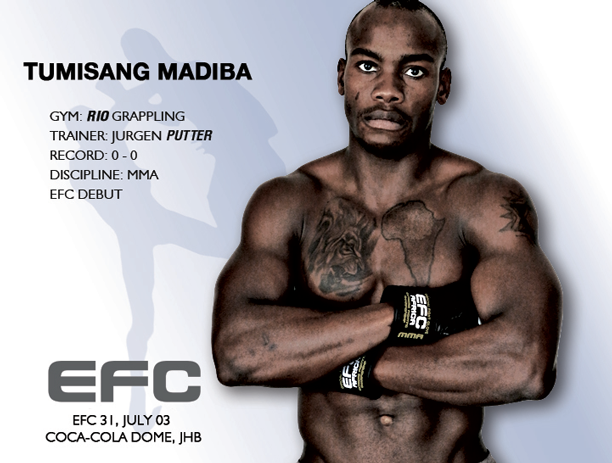 A school mate of Boyd Allen, Madiba entered Mixed Martial Arts two years ago, while in his first year of study toward a law degree.

“Two things actually happened,” said Madiba. “In 2011 I heard a radio advert for an EFC event, it was Demarte Pena fighting Leo Gloss. It sounded like something I wanted to do, but I was trying to enter the army at the time, and didn’t go after it. Then in 2012 I saw Boyd’s name in the paper, a story on his success in MMA. I called him and he suggested I should start training at the Rio Grappling Club.”

A member of a team comprising of the likes of EFC stars JP Kruger, Francois Groenewald and Cedric Doyle, Madiba quickly made a name for himself on the amateur circuit. There he racked up a 6-3-1 record, including bouts against current EFC greats Matthew Buirski, Barend Nienaber and Pierre Botha.

“My fight with Matt was very close,” he said. “It went to a split decision. Afterward Matt came to me and said he thought I won. At some point I’d love a rematch with Barend and Pierre also.”

The final spot on the EFC 31 card was due to be filled by Kanyeba Anicet, but a delay in securing the signature of his opponent kept the fight unannounced, after which a sudden bout of flu forced Kanyeba to withdraw.

“Wow. I left my degree because I knew that this is what I want to do,” said Madiba. “Now I’m here, having signed a fight with EFC. It’s an amazing feeling.”