Durban’s heroes to battle giants, at the ICC. 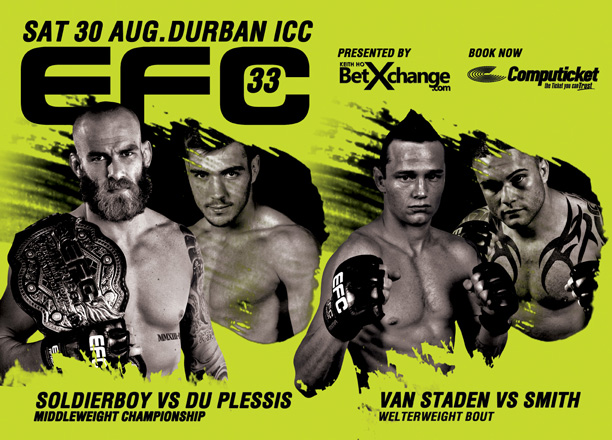 Martin ‘The Punisher’ van Staden co-headlines the event. Like McLellan, Van Staden is Durban born and raised, learned the craft of MMA in that city, and has grown from his very first local Durban bouts to become a legend of the African continent as a whole. He faces the equally legendary, former EFC middleweight champion Jeremy ‘Pitbull’ Smith, another man who cut his teeth in those early stages of Africa’s MMA history.

Donavin ‘Bam Bamz’ Hawkey, perhaps the greatest icon of them all, will bring his illustrious MMA career to a close in front of his home crowd. He faces Angola’s wrecking machine, Bernardo ‘Black Panther’ Mikixi, in another meeting of Africa’s giants.

Abdul ‘Hollywood’ Hassan rightfully joins the ranks of the night’s main card, battling former bantamweight champion Nkazimulo ‘Zuluboy’ Zulu in a fight that will put him in touching distance of the title, should he win.

“To be staging an event in Durban is a huge privilege,” said EFC president Cairo Howarth. “Durban has produced so many of the continent’s greatest stars, the city is a factory of MMA talent, and has been since the start. To see these men fight in the Hexagon at home, in front of the people that have supported them since the beginning, is an honour for us. Durban, African MMA is coming home.”

EFC hits Durban for the first time with EFC 33, presented by BetXchange.com, at the Durban ICC, Durban, on Saturday 30 August 2014. Tickets on sale at www.computicket.com.