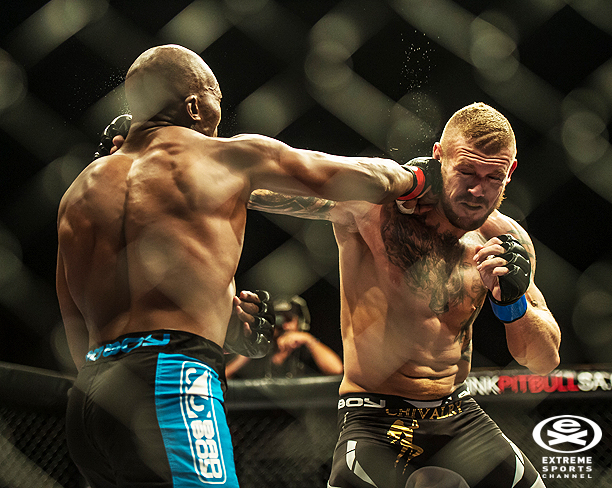 Kicking off what is set to be an explosive 2014 season, and returning after a three month absence following 2013’s colossal events, EFC 27 sees lightweight champion, Leon ‘The Iron Lion’ Mynhardt defend his precious gold against his mighty undefeated challenger Frederich “Ninja” Naumann at the epic Carnival City. Elsewhere, Fraser Opie takes on Tumelo ‘The Truck’ Maphutha in the light heavyweight division, Nkazimulo Zulu squares off with Charlie ‘Silky Smooth’ Weyer in the bantamweight league, and Vandam Mbuyi faces Brendon Groenewald for a shot at the highly-prized heavyweight title.

With ten new events per year broadcast in over 110 countries, and exclusive contracts with more than 100 of Africa’s toughest MMA athletes competing out of countries such as South Africa, D.R.C., Angola, Nigeria and Egypt, it’s easy to see why the passion of EFC has spread far beyond Africa and across the globe. Extreme brings the latest season of eagerly-awaited events to UK viewers on weeknights from 25th August until 9th September. Couch spectators can also catch up on 2013’s impressive season from 10th September at 22:00. For the athletes that compete in EFC Africa, MMA isn’t just a sport. It’s a mind-set. An all-consuming driving force. The stakes are higher than ever before. Whose blazing victory will be another’s shameful defeat?

About Extreme Sports Channel
The world renowned Extreme Sports Channel is the only TV destination for the world’s most thrilling and inspirational lifestyle, adventure and action sports programming. From gripping documentaries to insightful profiles of today’s biggest icons, irresistible adventures and sports championships, Extreme has it all.

The channel captures the pure passion of people who live out their dreams and embark on amazing expeditions; celebrates those who use skill, wit and determination to achieve their goals; and showcases the world’s most talented action sports athletes.

Extreme Sports Channel launched in 1999 and is now available to over 25 million subscribers in 65 territories and 11 languages across Europe, the Middle East and Africa. Online, the channel offers live streaming of events via Extreme.com powered by Freecaster.tv (www.extreme.com), the ultimate online destination for action sports fans.