From The Stands To The Hex

Buirski on his journey to July 03 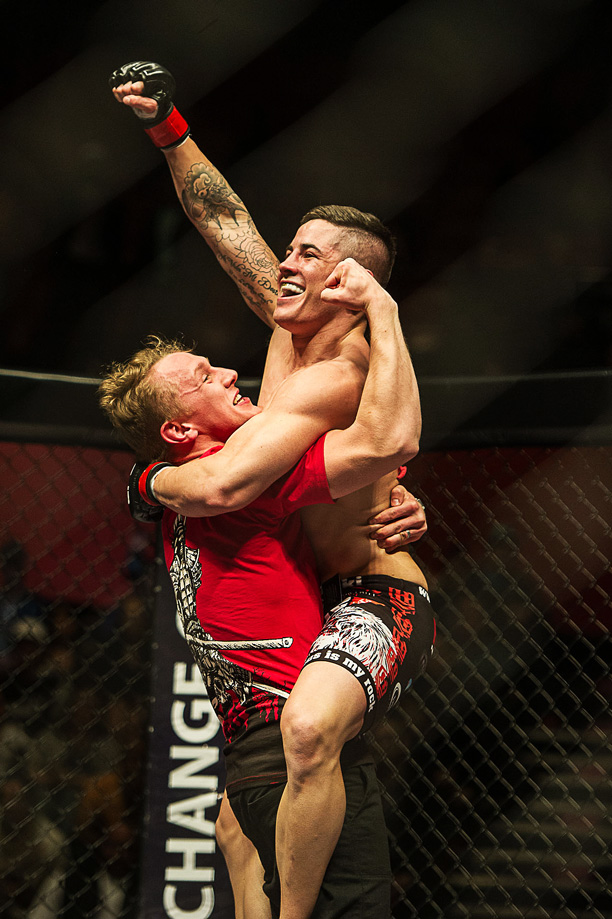 Neil Rooke of themmacorner.com spoke to Buirski, and discovered that fighting at the Dome is a homecoming, as this is the venue where it all began. Selections of the full article reprinted below:

In November 2009, history was being made in South Africa. EFC Africa was putting on its very first mixed martial arts event. As the crowd cheered in the Coca-Cola Dome in Johannesburg, Matt Buirski sat in the stands alongside his brother. The roar of the passionate fans was breathtaking, the adrenalin was pumping through his body and he wasn’t even inside the cage. A smile came to his face as he came to a realization. He had found his path in life.

“I started my martial arts journey in Muay Thai. As a competitive sportsman, I started in high school, playing for the South African junior water polo team and playing first team rugby. The thrill of competition was too much when leaving those sports. My brother, Dave, started Muay Thai, and I thought I would give it a bash,” Buirski explained to The MMA Corner. “Next thing I knew, I was in Thailand fighting in the WMF Amateur world champs against a Thai champion.

“A couple of days after returning from Thailand, it was the very first EFC Africa event. Dave and I attended. We decided MMA is what we wanted to do. I began training in different styles, and at EFC 20 I made my dream a reality and competed in my first bout for the promotion.”

“Last year was a wild ride,” he explained. “In seven months, I had four fights, making my debut in Cambodia and fighting three times in the EFC Hex. It was a mad blessing being able to do that. It did wear me out a bit, though, and I suffered a few injuries that took a while to heal in 2014. I’m rested up and ready to make my run for the title in 2014. I hope to have two more fights and a third being for the title.”

With the dream of fighting with EFC Africa coming true, Buirski hasn’t looked back since. Fighting for the premier MMA organization in Africa is something that he takes great pride in, and competing at such a high level makes him want to continue to succeed in the sport even more.

“It’s awesome having such a professional stage to fight on,” Buirski said. “EFC is really run like a well-oiled machine, from medical cover to fight night. I really feel like a professional athlete competing. I would say [Johannesburg]‘s the place to be if you are doing MMA in South Africa. There are plenty of coaches and fighters to up the skill and test yourself against.”

Stepping into the Hex for the first time this year, Buirski comes up against Cedric Doyle, who is riding a three-fight winning streak, with his lone loss coming at the hands of current bantamweight champion Nkazimulo Zulu.

“I’ve had a great camp and I’m excited to be stepping back in the Hex. It’s been a while,” he admitted. “I feel every fight I have progressed in skill, power and fitness. I’m going to show my progression as an all-around mixed martial artist.” With title aspirations at the forefront of his mind, Buirski knows that his first fight of 2014 is set to be his most important one. As he continues his path towards an eventual title shot with EFC Africa, he is also conscious of what being a champion could mean for his life.

“It would mean I have reached the pinnacle of the sport in Africa,” Buirski exclaimed. “And it would be a great honor. I believe it would also open doors to pursue MMA full-time, so I am working hard at that goal every day.”

Now that Buirski finds himself on the other side of the crowd and inside the Hex, it truly is a dream come true for him. With a debut year that would have been a dream for any competitor, all that is left is for him to begin his 2014 campaign in style on July 3. It’s one fight at a time for Buirski, and as he puts on a show in front of the fans in Johannesburg, he won’t forget what it was like to be sitting in those stands. The Coca-Cola Dome was where it all began for Buirski all those years ago. That’s where he fell in love with mixed martial arts. On July 3, that’s where his journey continues, as he strives to get yet another victory on Africa’s largest mixed martial arts stage.