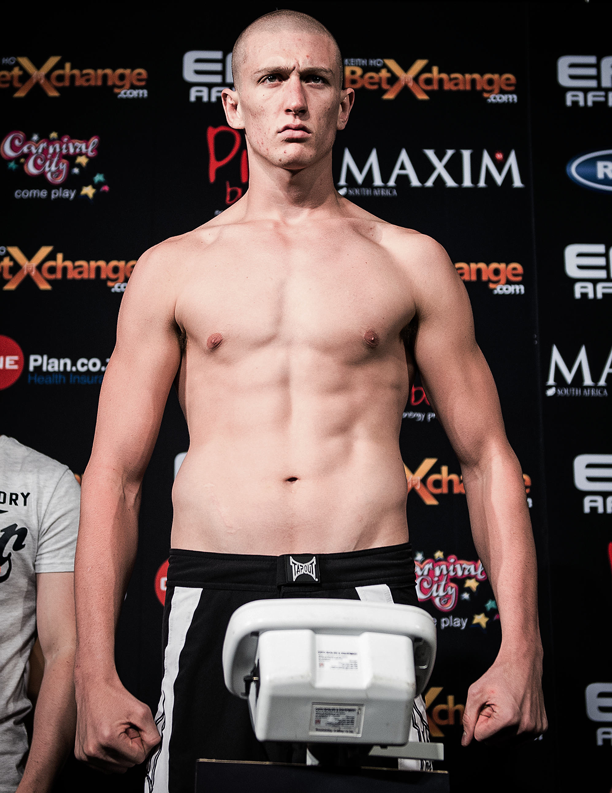 Johannesburg (South Africa) – A decision regarding the alleged illegal strikes landed by Mark Hulme in the Hulme vs. Morne Prinsloo (EFC 29), has been finalised after an appeal by Hulme.

In the first round of that bout Hulme landed three elbows to Prinsloo’s back. Referee Ian Pienaar called time on the fight, as the blows appeared to have landed on the spine of Prinsloo, and thereafter disqualified Hulme for illegal strikes.

Both Hulme and Prinsloo’s camps lodged complaints with event officials, putting the inquiry into motion.

Hulme was given the option of submitting a letter of motivation, after which footage was reviewed and an initial decision made. Event officials found that two of the three elbow strikes landed directly on the spine of Prinsloo, and handed a six month suspension to Hulme.

Hulme and his camp appealed the decision, after which another review took place, where the decision was upheld. Hulme’s suspension runs from the day of the bout, May 01, making him eligible to fight again at the end of October 2014.

“We’re happy that the rules were upheld, and all parties were able to state their case,” said EFC president Cairo Howarth. “Of course it’s an unfortunate situation. I know Mark, he is a great guy, and I am sure he will bounce back strongly.

It’s a hard lesson that not only he, but all our athletes can learn from. The rules are there for a reason. The event officials are doing an excellent job.”

“I understand the implications of my actions and accept my suspension gracefully,” said Hulme. “It’s important to remember that being aggressive is a part of what I do and cannot just be switched of so easily. In no way was I being disrespectful to Morne. I am taking this time to work on things I need to, and to improve myself and my skill. I am excited about competing again and cannot wait to show off the new and improved Mark Hulme.”

Prinsloo was transported to hospital after the bout, where a spinal concussion was diagnosed. He has subsequently been out of action for a few months, expect his return in October, EFC 34.

Currently All EFC Event officials are privately contracted to work at EFC Events directly by EFC. However, the current EFC officials do act on behalf of, and do represent, a body of MMA professionals which is in the process of formalization. Working closely together with SASCOC and MASA, an independent professional MMA Association is in the process, and final stages of formalization. The MMA SA PRO Association (Mixed Martial Arts South Africa Professional Association) is already a registered division under MASA (Mixed Martial Arts South Africa), which is registered with SASCOC. MMA SA PRO is a non-profit association.