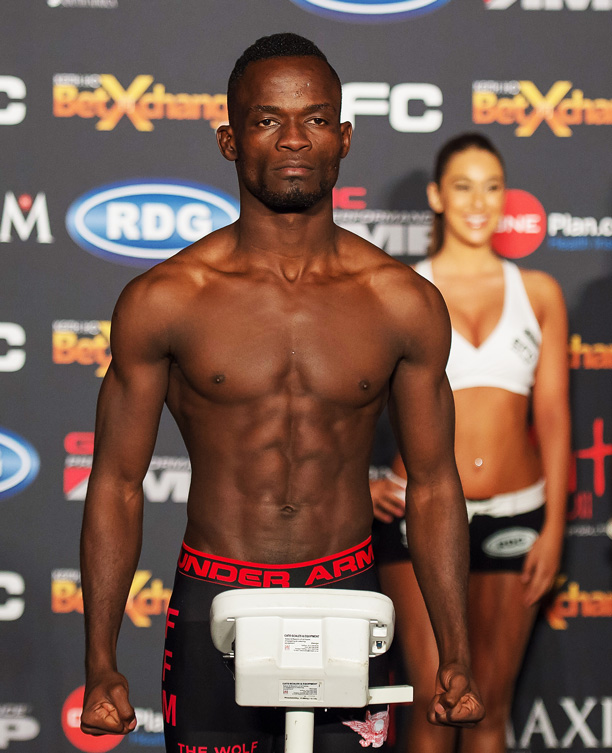 All eyes were on Angolan Demarte ‘The Wolf’ Pena, the former featherweight champion who relinquished his title in order to make a run at a second title at bantamweight. Should Pena win he will be the first man to hold an EFC title in two weight categories.

Often outsized at feather, the undefeated Pena handled his first major weight cut with aplomb, hitting the scale at 60.90kg, a perfect 100 grams under the 61kg cut off. He gave the champion an icy stare down and afterward remarked coolly, “I’ve been here many times. Tomorrow will be no different.”

The champion, Nkazimulo Zulu, had been outspoken all week. He had remarked that Pena has shown a lack of respect in his new division, and reminded the world that they fought at amateur level, where Zulu came out on top.

“My plan is just to knock him out… I’m ready,” said Zulu.

Fireworks sparked at the bantamweight bout opening tomorrow’s main card, when Matthew Buirski missed his weight by 1.3kg. Cedric Doyle immediately grinned, knowing that an overweight athlete will be penalized and that amount will revert to him. Buirksi charged in for their face-off, prompting security to separate the two.

Nelson Feiteira and Brendon Katz headline the Ster-Kinekor Prelim Card tomorrow night, and harsh words had been exchanged in the build-up. Finally confronted with his opponent, the veteran Katz went in close to stake his dominance on the fight, and was met by Feiteira refusing to back down. Again security had to separate the two. Their meeting promises a fearsome matchup, both tough and equally well-rounded. The crowd roared their approval when former heavyweight champion Andrew van Zyl took to the stage. He is up against Africa’s boxing champion Elvis Moyo tomorrow, and more than ready to re-ignite his title trail.

Light heavyweights Tumelo ‘The Truck’ Maphutha and Danie ‘Pitbull’ van Heerden did the unexpected. Instead of the traditional face-off both stopped, turned, and posed with a smile along with a feature on them in the event show guide.

A total of five athletes did not make weight, an occurrence judged harshly by the EFC organisation.

“It’s an athlete’s responsibility to make weight,” said EFC president Cairo Howarth. “Not making weight is an extremely poor reflection on themselves and the sport. Those that aren’t able to hit the limit inside the prescribed extra time given will be fined. Title hopes also take a knock as it’s not possible to challenge for a title in a weight division that an athlete has not technically qualified for.”

EFC 31 Weigh-in results were as follows: